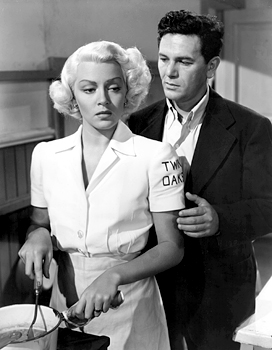 Lana Turner is smoking, that is all!

Noir’s are by and large fast moving, smart and a bit on the shallow side story wise. However nothing ever comes easy in a great noir. The film must work to gain your trust and the characters in the film must work to gain what they want. Things were far too easy in The Postman Always Rings Twice. Lana Turner spends a total of two minutes on screen with John Garfield and they utter maybe four words to each other before she proclaims that she loves him. Love shouldn’t come that quickly, nor should the idea of killing the husband to get him out of the way. But, in The Postman Always Rings Twice that is how it works. Everything comes easy and the film suffers because of it. It’s hard to get invested in characters when you know that the story is so flippant with them, will discard them at a moment’s notice or a mood change will occur with no explanation ever given. Sometimes movies can be too in-depth, other times they are like The Postman Always Rings Twice where there is almost no depth and as a result the actors have to work extra hard to try and pull you in.

This was my first exposure to Lana Turner, Cora Smith, and while I wouldn’t label her a great actress, she did play her part to a T. It’s no surprise that it came easily to her, she is a bombshell and undoubtedly had to fend off numerous suitors in her life who were willing to do all sorts of nefarious things just to be with her. Accompanying her is John Garfield, Frank Chambers, who imbues his character with the world weariness that is necessary for us to buy him as willing to take the chances he does. Outside of the husbands too “goody-goody” portrayal the rest of the acting was superb. Miss Turner and Mr. Garfield sold their love even when it seemed implausible. The two attorneys added a smartness to the film that had been previously lacking. For whatever shortcomings the story and narrative may have had the actors more than do their part to bring the film back on track.