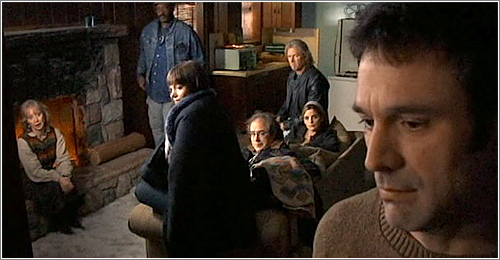 I am also a man from earth, but most people think of me as the weird dude from down the street, go figure!

I do have issues with some parts of The Man From Earth. The ending was not needed at all, it should never have been revealed what the deal was with John. By telling the viewer at the end that he is telling the truth an answer is given to us that we don’t need. The film should have ended with the conversation between John and Sandy, and with us still questioning in our heads not only the issues the movie raised but the validity of John’s story. There are also some minor hiccups in the acting, there are moments when it is clear that outside of Tony Todd, and John Billingsley at times, you are watching movie of the week actors. They were good for the most part, but every now and again a piece of dialogue would be delivered the wrong way or a scene would play awkward because they couldn’t keep up with the material. Lastly, the score really needed to be changed up, it was far too overbearing. The attempts to try and match up the music with whatever era John was talking about were misfires and the final song over the credits was pure pap.

But, with all the above being the case I still really liked The Man From Earth and thought all the positives far outweighed any of the negatives. Tony Todd would be one such positive, any time his character of Dan opens his mouth you take notice because it is Tony Todd and he is one of the best unknown actors out there, so there is no stumbling or awkwardness in his delivery. Most of all, The Man From Earth impressed me with its use of classical figures, religion, science, history and myth. People have tried to argue that The Man From Earth is an attack on Christianity and it is, but the people making that argument are still wrong. The Man From Earth doesn’t attack Christianity or any religion specifically, it attacks the very notion of human existence, from A to Z. Christianity and religion happens to be a part of that and so it was also questioned and examined. Don’t let others think for you, do your own thinking and you’ll quickly realize what The Man From Earth is trying to say and that the Christian zealots are out of their gourds like usual.