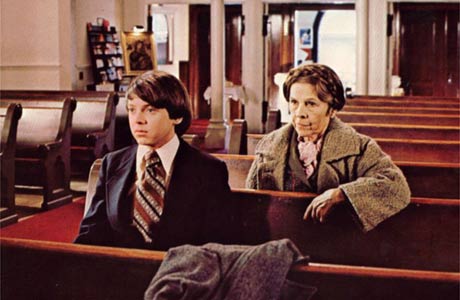 I don’t care how full of life she may be, I am not shacking up with any 79 year old, unless she happens to look like Raquel Welch!

Harold And Maude is definitely at its funniest when Harold is trying to kill himself and his mother is forced to react, or not react as the case may be, to each attempt. Whether he is hanging himself, hacking himself to death, drowning himself in a pool or stabbing himself through the chest with a ceremonial Hari Kari knife Harold is morose all the time and his mother is equally unamused. Her lack of reaction provide the biggest laughs in the film. When she is swimming, glances at the attempted drowning of her son next to her and then continues on as if its just another day in the pool you can’t help but let out a hearty chuckle. Maude is also funny, her way of dealing with life around her and her flippant attitude towards everything life entails is the perfect antithesis to Harold. Maude’s interaction with Tom Skerritt in the role of a motorcycle officer is especially funny. While Harold And Maude is a very dark comedy, Maude herself is very much the light portion of the movie and still manages to belong and be just as funny.

There were a few moments that didn’t ring true and in the end Harold And Maude feels like an incomplete movie. There’s no specific reason it feels incomplete, but I finished the movie thinking that it could have used an extra ten to fifteen minutes to further the story the amount I would have liked. Director Hal Ashby makes a choice I didn’t agree with by flashing on Maude’s arm to show her tattoo from when she was in a Nazi concentration camp. Harold And Maude was about Harold and his arriving to adulthood and that little glimpse of Maude’s dark past was an unneeded addition. I also didn’t agree with the decision regarding Maude’s death. It felt false and didn’t jive in any way with a character that spent all movie extolling the virtues of living.

Harold And Maude is heralded as the first cult classic, and I can see why. For the majority of people dark comedies take a few viewings to sink in and I’m not surprised that Harold And Maude was panned all around upon its release only to pick up its cult status years later. Harold And Maude isn’t essential viewing, but it is a funny movie that makes comedic moments of the least likely, just like any good dark comedy should.