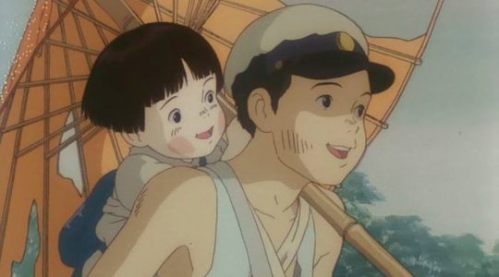 Film #35 in the World War II Marathon, and I still can’t stop crying!

Movies can serve any number of functions. They can make you think, they can be mindless entertainment, they are for laughter, for intense action, for drama, etc.. Every once in a while a movie comes along that is without definition, a film that is so powerful that it transcends above any sort of label, don’t worry I’m sure I’ll label Hotaru No Haka a few times in this review because I’m a dolt who doesn’t pay attention to his own writing, but you get my point. Hotaru No Haka makes you think about the trivial nature of war, about the preciousness of life, about how people can be too stubborn for their own good. It also makes you relish the joy people can get out of life, the small moments that you can never reproduce no matter how hard you try. As the viewer, it also makes your guts feel like they have been taken from your body and put into a pot of boiling water. Some films affect you, very few affect you so much that they hurt, and Hotaru No Haka hurts deeply.

What is most disturbing about Hotaru No Haka is how beautiful it is throughout. The animation is catching, with layers and refinement. The Japanese villages are realistic, there is incredible detail in every frame, and most importantly Seita and Setsuko display the gamut of human emotion. Hotaru No Haka is full of breathtaking images, fireflies flitting through the air, a beach side excursion, the journey to and fro as brother and sister move into their new river side abode. But, there are times when Hotaru No Haka is so beautiful that it is disgusting. I don’t mean that in a bad way, although I probably don’t need to explain that. There are moments such as the dying Setsuko, the beaten up Seita, and other various downturns their lives face that are rendered beautifully but the content is hard to take in and feels truly disgusting.

To say that Hotaru No Haka is anti-war would be an understatement, but Hotaru No Haka isn’t a one trick pony. It is anti-war, but it is also pro humanity and anti-humanity at the same time. It is a story about people needing to connect with each other and look out for each other even during the most extreme times. Hotaru No Haka is also about the burden of adulthood being placed on someone who isn’t ready for it and how a major decision that may seem right to him actually required him to do that opposite and swallow his pride. On the other side of the coin, it is also about people needing to realize that every situation is different and the rules that may apply to one don’t apply to others. Every theme that Hotaru No Haka touches on is handled deftly and given a great amount of depth and not a facet of the film seems forced. The areas that Hotaru No Haka touches on are given room to breathe, the characters are allowed to develop and life is allowed to carry out in a very natural way.

Where Hotaru No Haka is the most effective is in its ability to engender emotion from the audience. Other movies would have to be sentimental, over the top or overtly schmaltzy in order to get the type of emotion from the audience that Hotaru No Haka gets with very little effort. When Hotaru No Haka wants you to be happy, the characters make you happy. When the film wants you to be angry, it makes you angry. When it wants you to be depressed, you are near suicidal with anguish. Hotaru No Haka isn’t manipulative and that is its biggest strength. The emotions spring from the audience as a natural reaction to what is happening on screen. You aren’t forced to feel depressed, you simply watch what is transpiring on your screen and the emotions flows out of you like a dam that has broken. The one scene that most encapsulates this is the Setsuko remembrance at the end. As the clips roll by in ghostly fashion the viewer is devastated by what they see. Admittedly I don’t make any claims to being a tough guy, but I also rarely cry. The Setsuko remembrance thoroughly punished me from the inside out. With every second I felt pain and loss and the tears flowed. I can’t think of a single scene in the history of cinema that is quite as profound and painful all at the same time.

I don’t feel comfortable recommending Hotaru No Haka, because I don’t know if I want to recommend a world of hurt to someone. It is truly a masterpiece, but it is also a film that will leave you depressed and destroyed by the time it is over. I have long been a fan of animation and a champion of animation as a viable movie form right alongside live action. While I think any number of animated movies showcase how even more child friendly animated films aren’t exactly child friendly and are just as worthy of admiration as any live action film, Hotaru No Haka goes beyond all others when it comes to showing how adult animation can be. It is such a powerful film that I won’t be able to revisit it anytime soon, and no movie has ever had that effect on me before. I may not be willing to give out a recommendation for a film that will destroy you emotionally, but I can further the fact that Hotaru No Haka is a masterpiece of cinema and a true experience for the moviegoer.