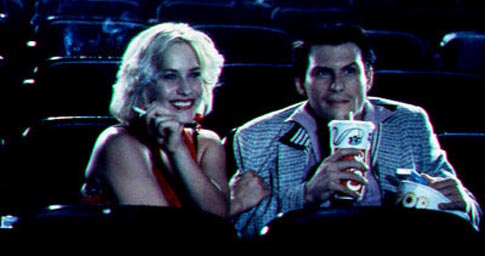 The first film in my only match-up in the fourth round of the 90s US Bracket!

Color me shocked, because I did not expect to love True Romance as much as I did. The low expectations I had going into the film were due to the two men behind the film, writer Quintin Tarantino and director Tony Scott. It’s no secret to anyone that knows me that I don’t hold Tarantino in any high regard and am mostly put off by his too slick dialogue and flash for the sake of flash direction. Scott on the other hand is pretty inoffensive to me, but he’s just that, an inoffensive director who excels at making middle of the road Hollywood films. Sometimes the work of either man reaches the level of average or good, but for the most part they are held down by their faults within their crafts. True Romance ends up being some sort of mysterious force, a film where the two men meet and manage to bring out the best in each other and move beyond the failings of their respective styles that usually don’t do much for me.

True Romance didn’t start out in that great of fashion, and I immediately thought this was going to be a typical Tarantino script with the standard Scott direction. But then Alabama entered the picture and everything changed. I literally stopped and said, “Oh, I get this, I know what is happening.” Now, I don’t claim that any of what I am about to write is what Tarantino or Scott were going for, I would wager it probably isn’t. But, the following is what I took from the picture and why I consider this not only easily the best film Tony Scott has ever directed, but the best writing effort of Tarantino’s career.

The problem I have with Tarantino’s other works like Reservoir Dogs or Pulp Fiction is that they are flashy surreal tales that he bogs down in realistic settings. Tarantino doesn’t want those movies to be fantastical experiences, rather he wants them to be the real world with fantastic slices tossed in every once in a while. Tony Scott takes the opposite approach, he gives us tales like Deja Vu or Crimson Tide where they clearly feel like the real world with fantastic elements added to them, but Scott paints them as pure action fantasy and they become mired in mediocrity as a result. But, at about the ten minute mark of True Romance both Tarantino and Scott decide that this is a film that may take place in a world that we know physically, but it is complete fantasy. No woman such as Alabama actually exists, no conversation like the one between Clifford and Vincenzo would ever actually take place and there isn’t a single comic book geek the world over like Clarence. The choice to go completely fantasy, at least in my mind, was the best decision either creative force ever made.

True Romance is bloody and violent, love happens at the drop of a dime, characters talk fast, bullets fly everywhere, Elvis Presley talks to you and Dennis Hopper tells amazing stories to Christopher Walken about the true nature of Sicilians. True Romance becomes an excellent film in the way that it crafts this fantasy world and allows Tarantino to go wild with his writing while for the one and only time in his career Scott actually allows the camera some freedom outside of Hollywood conventions. But, the key moment is the ending, and the fact that it is a happy one. Tarantino’s original ending never would have worked, because True Romance isn’t a dark fantasy, it’s a violent fantasy but a decidedly happy one. Clarence and Alabama need to off into the sunset to live happily ever after, not because it is a Hollywood ending, but because that is the way this grandiose fantasy deserves, nay, needs to end.

Another area where True Romance excels is in its diverse cast, I don’t believe Christian Slater or Patricia Arquette have ever been better. You need to believe that their mythical type of love is real, and as Alabama is being thoroughly thrashed by a somewhat smaller James Gandolfini you believe that love because of how much pain she endures for it. The same is true of the vengeance filled Clarence, who does something that only happens in fairy tales, he confronts the scary beast and not only defeats him but saves his woman from ever having to deal with the beast again. The aforementioned scene between Christopher Walken and Dennis Hopper is pure delight, two of the best character actors of all time chewing up the scene in a laid back fashion and completely drawing you into their world. Gary Oldman is excellent and almost steals the show as Drexl, while Michael Rapaport and Bronson Pinchot do their best to try and steal the later scenes, until Tom Sizemore and Chris Penn come on the scene and try to do the same.

True Romance is a heck of a ride, I can’t speak for the theatrical cut as I’ve never seen it, and is a film that I know Tarantino fans will greatly enjoy. For people who have always thought of Tony Scott as a completely mediocre director True Romance shows what he is capable of when he just lets go. I know that the majority of people don’t share my feelings on Tarantino, but True Romance is Tarantino at his very best and one of the few times where I love his work. If he would just allow his characters to live in a fantasy world more often I think I may like his work a lot more than I do. But, that’s getting too off topic, True Romance is a great picture and one that will sneak up on you if you’ve never seen it. I’m happy I was forced to give it a shot, and you should give this frenetic, highly charged fantasy film a shot as well.