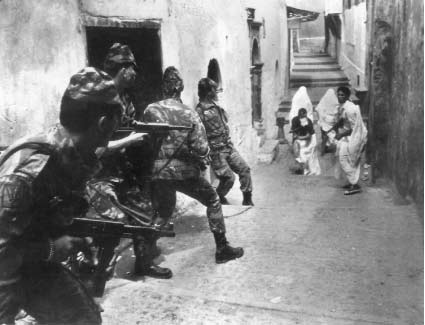 A not so partial look at the harshness of terrorism!

Terrorism affects the world around us every day. There isn’t a corner of the world where terrorist actions aren’t undertaken using guerrilla tactics developed to fight the Nazis in World War II. Now, there is a fine line between terrorist and freedom fighter, a line so fine that entire books could be written on the subject. Based on the actions of the FLN as portrayed in La Battaglia Di Algeri they would fall somewhere in the middle of freedom fighter and terrorist and therefore are a very murky entity. It’s too bad that La Battaglia Di Algeri didn’t choose to be quite so murky and instead sided with one side on an issue that really has no right side.

The visual and narrative style of La Battaglia Di Algeri is presented in quasi documentary style and it is very effective. We never connect with any of the characters, but that is okay because the film is a showing of events, not people, and therefore we don’t need to connect with them and they don’t need to develop. The story simply needs to go from point A to point B and provide a clear presentation of what is going on and what has transpired to change events in the little snippets we are provided. The one area in its narrative and visual style where I wish La Battaglia Di Algeri would have been better was in a clear presentation. There are times when it is difficult to get your bearings on what is going on in a particular snippet, and by the time you do the film has moved on to the next snippet.

Where La Battaglia Di Algeri arouses the most discussion is in the obvious terrorist versus government issue. La Battaglia Di Algeri did excel in putting the elements of both terrorism/freedom fighting and government suppression/killing in the light for everyone to see. Children are killed by both sides, people are slaughtered by both sides, both sides are shown to be monstrous in their actions. It is also on this issue that I believe La Battaglia Di Algeri falters the most and that is because on an issue where it shouldn’t take a side it clearly does. I fail to side with either the government or the FLN because the actions of both are reprehensible. There is a theme developed of always accompanying the atrocities committed by the FLN with mute silence and scenes that end as soon as the atrocity goes down, whereas the atrocities of the French are accompanied with sympathetic music strings and lingering shots of those affected. At a point near the middle La Battaglia Di Algeri goes from a look at terrorism versus occupation to a film that tells you that atrocities don’t matter in the cause of freedom but they do matter when trying to suppress freedom. The final shot tells all, because instead of a shot of the combined effect of the fighting, we are given the Algerian people celebrating their victory, but really, outside of sentimentality and manipulation of the audience, is their any victory in such a war?

La Battaglia Di Algeri remains a stalwart look at terrorist actions, and the case of freedom fighters versus terrorists as well as governments versus indigenous people. It’s documentary style film making is appealing for the most part, albeit a tad too murky. But, when push comes to shove the film isn’t murky enough in its issues and takes sides when it shouldn’t. This leaves La Battaglia Di Algeri as a well made film that will touch others, while some won’t be taken by its manipulative techniques. I fall in the latter, but I realize that many people will disagree with me. There is no correct side on the issue of the films message, just as there should be no correct side when it comes to the atrocity of death.