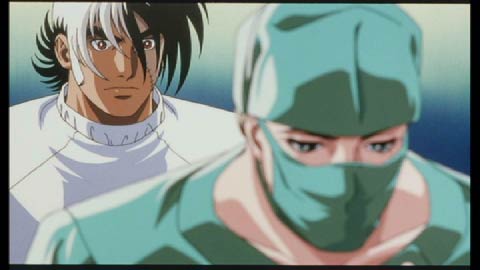 The second film in my first match-up in the first round of the 90s Far East Bracket!

Medical dramas don’t interest me, but an anime medical drama from the creator of Astro Boy does pique my interest. Wait, he’s not involved with this movie, someone else is, damn it! Well, that’s a strike right off the bat and things didn’t get much better, although they didn’t succumb to a terminal condition. The problem right off the bat with Burakku Jakku is the character of Dr. Black Jack and his confounding Robin Hood tendencies. The film tries to paint him as a crusader for medicine, but he charges exorbitant amounts of money for his services and therefore only serves the rich. This dichotomy is never once touched upon and therefore it creates a very shallow character when he does get indignant about the treatment of the super-humans. There’s also his fatherly skills, or complete lack thereof, I mean his daughter doesn’t even care he’s gone until she sheds a few tears near the end of the film. A highly confusing and underdeveloped character.

When your lead character is confusing and the rest of your characters are cardboard cut outs your film is already behind the eight ball. Luckily Burakku Jakku does recover somewhat with an interesting medical mystery in the form of the super-humans and their maladies. Osamu Dezaki allows the mystery to unfold at a nice pace and the viewer feels drawn to the mystery, because it is well crafted without falling prey to twist syndrome. The resolution to the mystery is acceptable, it’s not great and a tad bit of a letdown, but overall it ends up an acceptable ending to a well set up mystery.

If Burakku Jakku had stayed the course of a medical mystery film it would have been fine. The operation scenes do provide good drama, and the research scenes are a nice support to the medical mystery. But, Burakku Jakku is not content with being a medical mystery drama, and it introduces the MST, an oh so cheesy medical soldier team, has car chases and gun battles that do not belong in the film and a final sequence that pushes the mystery to the background and instead focuses on soldiers razing a research facility. There are also a lot of logic gaps present and a scenario involving plant pollen and a nomadic tribe that is so far fetched the film manages to reach terminal levels in its closing seconds, only to be saved by a quick race to the credits.

Burakku Jakku is a confounding film because it could have been a great medical mystery/drama, but it chose to go the standard action route. The animation is never anything to write home about, at times it looks better than most, but on the whole it has a very average look about it. I haven’t said it in a while, but Burakku Jakku is a very middle of the road film. Maybe the TV series is better, and I know the manga is, but unless you are a die hard fan of the TV series then Burakku Jakku is a film you can easily avoid.