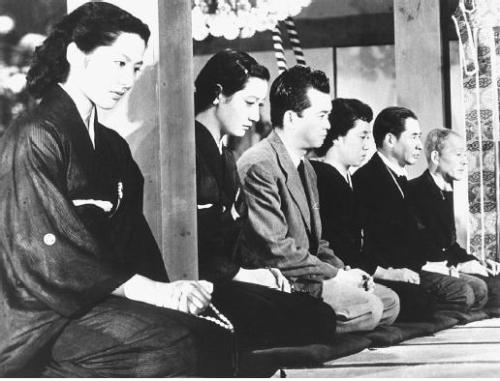 Believe it or not but there were great films coming from Japan in the classic era that were from directors not named Akira Kurosawa!

I have oft commented on minimalist film making, but it’s always important to recognize the distinction between minimalist film making and minimal emotion. Yasujiro Ozu is a minimalist in how he sets up his camera, the way he edits, and the way he structures his narrative. But, he is nowhere near a minimalist when it comes to the depth and emotion he gets from every actor and imbues into every scene. Ozu may put his camera in one spot and keep it there, nor will he cut away during conversations, but this allows us to focus on the themes of Tôkyô Monogatari, on the motions that the actors are layering into their characters, how a simple spoken yes from Chishu Ryu can mean yes, no, confusion, happiness or heartfelt sorrow. The direction is very static, but this is not a static movie, it builds on the emotions of its characters to an almost breaking point near the end. In the cusp of the film there is a fifteen minute span when Tôkyô Monogatari has reached the end of its narrative and the direction is still very quiet, natural and small, but for the viewer the emotion is pouring out of the movie like a massive wave from any CGI blockbuster.

I find it hard to talk about this movie beyond the core concept I discussed above, because that really is the heart of the film. There is a basic emotion to Tôkyô Monogatari that anyone can relate to. I don’t think I would be wrong in theorizing that every person who reads my work has at some point in time been at a family gathering where instead of swapping stories and catching up a majority of the time is spent in front of the TV and avoiding one another. There does come a time in your life when the joys of family bonding fade and it becomes like a chore to see your family. This isn’t all the time mind you, there are still many times when I am happy to see my family and will annoy the heck out of them with my enthusiasm. But, there are also occasions where I zone my family out and would rather not deal with what they have to say or feel put upon by their mere presence. I don’t believe this makes myself, or anyone else who will admit to this behavior, a bad person. It only serves to highlight the imperfect beings that we are. Tôkyô Monogatari captures that imperfection and shows how despite our shortcomings and our mistakes we can still be close and life will still go on, because one of the great things about family is that they do accept you flaws and all.

I’m not going to go into great detail about the acting in Tôkyô Monogatari, but without such great performances the themes of old age, silent judgment, irritation, love, loss, loneliness and the generation gap would be lost. While I thought every performance in Tôkyô Monogatari was worthy of note, it should come as no surprise that the work of Chishu Ryu as Shukishi Hirayama, or the father, was the best of the bunch. As I noted above his simple uttering of the word yes had more depth and meaning behind it than entire performances in other films. He becomes the emotional anchor near the finale, he shares that task with the mother and Noriko for the rest of the film, but he is our guide through the theme and emotional gamut of Tôkyô Monogatari’s entire running time.

I have given harsh reviews to the films Crash and Babel, films that cover much the same ground as Tôkyô Monogatari, the lack of communication, the changing of society as time passes and more. Where those movies utterly fail, Tôkyô Monogatari succeeds en masse. It isn’t heavy handed, obvious or manipulative. It is a movie that conveys its themes and emotions via simple means, but does so with incredible depth and range. Tôkyô Monogatari may just be one of the best movies you’ve never seen and it’s as good of an introduction to the works of Yasujiro Ozu as you will ever find.