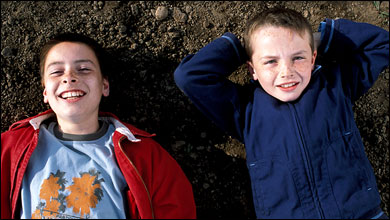 I would keep the money, no questions asked, but you know that already!

Children in movies can be problematic, although they are just as problematic as any adult. One of the reasons I’ve never understood the complaints lodged against child actors is that adult actors are just as bad and can ruin movies at the same rate as a child actor. Thus, it’s a joy to see two actors who fully inhabit their roles, regardless of whether they be adult or child. Alex Etel and Lewis McGibbon fully take on their characters and embrace the fantasy world of Millions. They have moments of sincerity, puzzlement, wonder, intelligence and stupidity. They never seem like they are acting, the consistently come across as two kids, two brothers living in the world created by Danny Boyle.

Millions is a fantasy tale first and foremost, any attempts to tie it into the real world are futile. There may be some real world dynamics on display, but those dynamics are surrounded by fantasy elements. These kids know more than they should, events happen that are pure fantasy, that is why attempts to squeeze Millions into a real world viewpoint have proven pointless. This fantasy creates a charming tale, one that is funny throughout and a bit scary, just like any good fantasy should be. There are moments with the brothers that are very funny indeed, but there are also moments of genuine fright. The reason for this is because it isn’t a fantasy through our eyes, but through the eyes of children. Keep that in mind if you find yourself struggling to reconcile what the movie is showing you with the eyes of an adult residing in the real world.

I was a fan of the art design in Millions, especially that of the town Alex & Lewis live in. It has a very unique look to it, yet at the same time it looks just like any other town the world over. The uniqueness comes from the color palette used, hues of purple and blue aren’t the norm in movie towns. The structural designs of the houses are quite regular looking and that is where the familiarity comes from.

Danny Boyle enjoys using the rapid cut direction style, it is present in all his films and Millions is no different. There are times in Millions where it distracts, but for the most part it is handled well, bridging between scenes. Boyle uses other methods as well, and I enjoyed how he allowed his camera to open up a bit more, showing how large the world can look through the eyes of these children.

The story of Millions is good enough to keep the viewer interested. It gets a little hectic in its final act and does strain what one is willing to accept as fantasy. It strains that line, but never breaks it and that is an important distinction. The same could be said of the themes Millions touches on. It goes in a few different directions, some tried and true while others seem to be fresh and don’t exactly reconcile with the final result of the picture. Millions is an uplifting and charming tale, yet at times it wants to poke holes into the actions of its characters, and not in a “learn from this” manner. It is hard at times to reconcile the differences between theme and story, but the two never veer far apart for long.

The only area that at times was lacking in Millions was narrative flow. The Saint interludes were interesting, but sometimes they interrupted the flow of the story. It felt like the story would pick up steam and then have to take a backseat to another visit from a Saint. I understand why they were needed for the ending, but they could have been spliced so as to be more in tune with the natural flow of the narrative.

In Millions Danny Boyle has crafted a charming and light tale, the lightest of his career in fact. His distinct directorial style is still present and the film does come together and survive any of its weak points to leave the viewer ultimately satisfied as the credits roll. Give these Millions a chance, they may be the closest you’ll ever get to the real thing.