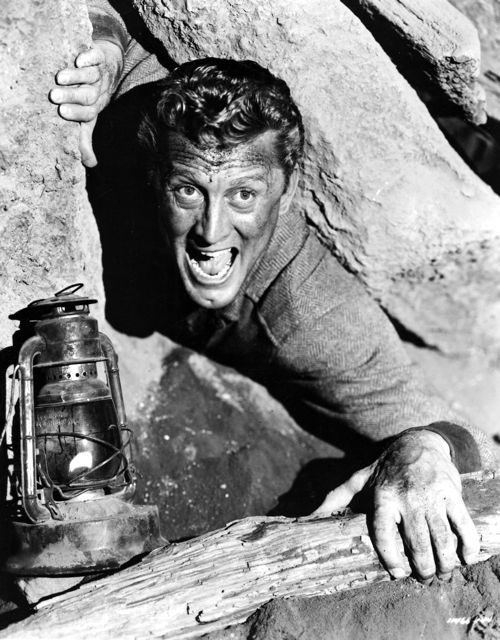 My all time Favorite Wilder!

The dialogue in Ace In The Hole is, to borrow a phrase, off the chain. When Charlie Tatum utters this,

I knew I was in for a treat, and Ace In The Hole never lets up. It is chock full of brilliant double entendres, one liners and lines that are so true they almost hurt.

Billy Wilder finds ways to be just as inventive with his camera as he is with the dialogue in Ace In The Hole. There are fade-ins and outs that work off of the same frame of reference, the subtle bus drive-by to illustrate Jan Sterling not leaving and more. The best shot of the picture is probably the long panning shot delivered when Mr. Minosa is on top of the mountain giving food to the workers and turns to look at the new village below him. Then again, maybe it is the menacing and yet simple shot of Kirk Douglas grabbing the back of Jan Sterling’s hair, or the sudden drawback after Douglas has been stabbed.

Ace In The Hole is an obvious critique of journalism and the lengths people will go to in order to get a story. Anyone who dismisses the potential for an incident such as the one brought on by Charlie Tatum needs to grow up and look at the world around them and what the media does on a daily basis. The fact that it is an obvious critique isn’t a problem because it is an honest and truthful critique that is well handled. The movie takes it a step further however, not only taking the media to task but also asking about the people who crave these media stories. Who is worse, the journalists causing the news or the public perpetuating a world where this type of news is desired and needed for a news outlet to survive?

Jan Sterling is tempestuous as the wife who doesn’t want to be a wife any longer and the rest of the cast is full of great character performances. But, Ace In The Hole is Kirk Douglas’ movie from start to finish. He is reprehensible, he is vicious, he is everything his character needed to be. That is why we believe in Charlie Tatum, why we know he could and does exist and why we know that even in the end when he has lost control he isn’t confessing or becoming a good man but is trying to turn the situation to his advantage once again.

The story in Ace In The Hole is great, the acting is excellent, the direction is superb. For oh so many reasons Ace In the Hole isn’t just my favorite Billy Wilder but it is his best as well as the best the noir genre has to offer. Surprisingly Ace In The Hole is a slept on classic, it garners nowhere near the pub that it should. If you haven’t seen Ace In The Hole then you need to rectify that situation as soon as possible, only make sure you don’t go through any Indian mountains in your attempts to see this all time classic.