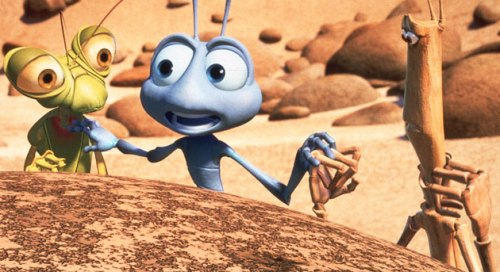 Film #2 in my personal trek through the Pixar catalog!

I am a huge fan of Pixar, hence the reason for my self-imposed travels through the Pixar catalog for the blog. A Bug’s Life is a film that for one reason or another gets the shaft when great Pixar films are bandied about. It’s not on the same level as Toy Story 2, Finding Nemo or WALL·E, but it is on the same level as The Incredibles, Monsters, Inc., Cars, Ratatouille and Toy Story. All great films, yet more often than not A Bug’s Life is forgotten when discussion of great Pixar films or Pixar films in general takes place.

Being Pixar, the animation in A Bug’s Life looks tremendous. It is clean and crisp, but it is also textured. What separates Pixar’s 3D animation from other companies is their ability to provide layer and texture to the animation. This can also be seen in their ability to craft compelling worlds, there is tremendous detail in the island upon which the ants live. There is even more detail when you travel below into the ant hill and can see an entire society existing. But, where the animation in A Bug’s Life is perhaps at its best is in the few instances of water being shown. It is very realistic when shown in pond form early on, but when shown in rainfall it isn’t just realistic it is an event, a well detailed event.

When watching a Pixar film it should be obvious what separates their end product from that of other animation studios. It isn’t just the excellent animation, it is the stories being told. Yes, the story in A Bug’s Life is a little too obvious and we all know where it will end up. But that is the lone drawback to the film, and even then the story is still well crafted. It may be obvious, but it isn’t just a surface story. There is depth to the story and there is depth to be found in the characters.

A Bug’s Life is funny, it has a compelling mixture of childish and adult humor. I know it’s said a lot, but it still holds true, kids will enjoy A Bug’s Life, but adults can relate to it and will love the film as well. A Bug’s Life may be a kids movie in its marketing, but in its style and presentation it is a movie for all ages, not just kids. The use of real life materials for bug habitats as well as the use of gags we can relate to in the humor is very adult. I was cracking up as a bug was drawn to his inevitable fate with a bug light. But, beyond the humor there are other adult factors, such as the hierarchy that is created for the bugs.

As I said at the onset A Bug’s Life isn’t the best Pixar film, but it is a fine film regardless. It will make you laugh and it invests enough time in its story and characters so that the audience cares about what happens to them. The voice acting is good across the board, the story is touching, fun and contains a sincere message that is not delivered in a heavy handed sincere fashion. Unless you happen to be a certain person I know, check out A Bug’s Life, you won’t regret it. A Bug’s Life is an enjoyable film for the entire family, or for single adults as well, just avoid any bright shiny lights, those things are dangerous.