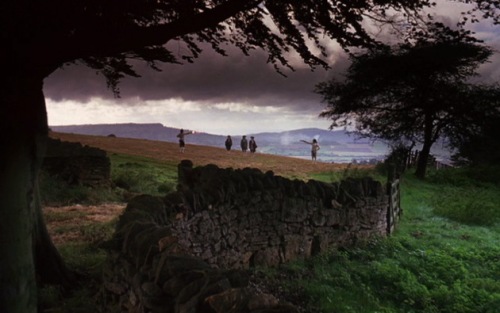 Stanley Kubrick is a mechanic, not a director. He isn’t always concerned with why things happen, he’s more concerned with the nuts and bolts of why they happen. It may not seem like a major distinction, but in comparing Kubrick’s body of work to that of any other director it becomes glaringly clear. Barry Lyndon could have been a melodramatic soap opera, maybe that Barry Lyndon would have been a great movie as well. But, soap opera didn’t interest Kubrick, the mechanics of European society interested Kubrick. Kubrick wanted to break down the European way of life, their class structure, to look at it not with emotion, but with honesty. This is the point that either sells people on Barry Lyndon or drives them away.

By choosing to take a mechanical approach to European society Kubrick has left Barry Lyndon an emotionally bereft picture. This is great at times, yet at others it leaves you feeling like you just entered a dead area. Some moments appear to go on for longer than needed, the image has been taken apart, we realize what it entails, yet the scene still lingers past the point we need it to. But, this is balanced by scenes where the image has been taken apart and the camera lingers because we need more time to digest what we have just seen. Barry Lyndon walks a tight rope in this sense, by operating with no pretense of emotion each scene must matter to us or the picture is flawed. Not every scene does matter, but enough do so that Barry Lyndon remains a great picture.

Early on the framing of Barry Lyndon begins to take shape. The camera is constantly pulling back in Barry Lyndon. It doesn’t zoom in that much, nor does it move side to side, through or around objects. The camera in Barry Lyndon pulls back to give a larger picture and to tell the audience that this is what you are supposed to be seeing, not just the center of the picture but the entire society they inhabit. In this way the cinematography is wide open and beautiful, by framing the characters in the middle of almost every shot the land stretches around them and we must take everything in.

Barry Lyndon is an austere picture, it is as I said earlier emotionally bereft. But, emotion isn’t the point of Barry Lyndon, the point can be many things, but to me it was all about the mechanics of Stanley Kubrick taking apart a society and showing how it works and what it was really about. Class struggles are shown, the way money works, how the tiniest of events can shape a life and how classical nobility wasn’t that noble after all. Barry Lyndon is a film about discovery and taking time to enjoy the languid pace. It isn’t always on the right track, but when it is Barry Lyndon is a great picture and a welcome edition to the catalog of Stanley Kubrick.