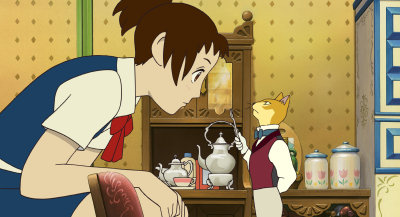 Turning into a cat doesn’t sound like much fun, I’m sure there are crude jokes I could make, but not now, not now!

A somewhat sequel to the fine Mimi Wo Sumaseba, Neko No Ongaeshi follows the exploits of Baron, the statue of a gentleman cat that in this movie can come to life. Most Studio Ghibli films tackle hard subjects, but every once in a while, read not often, they come out with a film that is meant to be more fun with only a minor issue at its core. Neko No Ongaeshi isn’t a deep film, but it is an entertaining hour and change.

Animation wise Neko No Ongaeshi is good, but it’s not finely detailed, it looks ordinary and plain compared to what I know Studio Ghibli is capable of. The slow motion catch of Prince Lune by Haru in her lacrosse stick looks great, and so do some other moments, but otherwise it is a very ordinary looking animation feature. The story is a decent surface story, you get what the characters are saying and you understand what is happening on screen, but it doesn’t go beneath that surface, what you see is all you get. There’s really only a few moments in the film where there is a noticeable dip in quality, once our protagonists have entered the Cat Kingdom there are some odd jump cuts in the animation that didn’t make much sense.