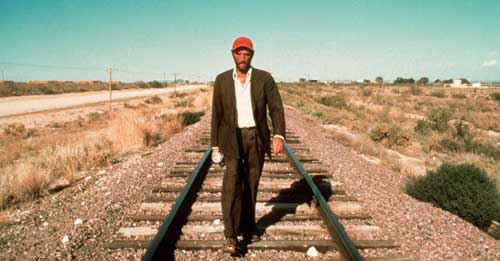 My second entry in the Cannes section of the Movie Dictator Club for the month of May, 2009!

As it drew to its conclusion Paris, Texas could have gone off the rails. So much had been invested in the journey of Travis, in his plight and his mystery, that his return to see his wife was either going to cement the film as a master work or an interesting, but ultimately futile exploration of the human soul. To say that meeting was handled in deft fashion would be an understatement of the highest order. The first meeting between Jane and Travis is like a test for the two of them, while their final meeting is a cleansing of the soul on both sides. I don’t claim to be that knowledgeable on the careers of Harry Dean Stanton or Nastassja Kinski, but I don’t know if anything else I see from them will ever be able to top their work in those final moments.

What brings us to that final meeting is a series of odd events. I don’t know if odd is even the right word, but it is the word that springs to mind at the present time. Travis is an oddity, in a world where the need to conform, to go with the flow no matter what has become paramount, he is outside the realm of society. He isn’t insane, he’s damaged, broken. Travis is a shattered man, no longer fit for conventional society, and the only connections he can make are with fellow social outcasts. Anne is a foreigner in an odd land, the maid is much the same, his son is a child in an adult world and Jane is just as damaged as he is. It is only to those characters that he can really connect and express himself again. The meeting with his wife becomes so important to Travis and to the viewer because we know the function it serves in his life. He needs to cleanse his soul, he needs to own up to his past and accept his part in the end of his marriage and the ruination of his family. Even as he cleanses his soul we understand that the cleansing isn’t about him, it’s about his son and wife. He wants them to have a happy life, he wants to right his wrong but he knows that he can’t be a part of that happiness. In that way Paris, Texas is bittersweet, Travis corrects his mistakes, he applies a salve to his family and comes to grips with his own actions. But, there is no place for him in the rebuilt world of Hunter and Jane, so he leaves so that they may be happy.

The knee jerk reaction may be to say, “Wait, he wants his family to be happy so he tears Hunter away from Walt and Anne and takes him to his stripper mother?” It is a valid critique, I will grant you that. But, I believe that loses sight of the most honest part of Paris, Texas, life isn’t fair. In a perfect world Travis’ family never would have been destroyed. In a perfect world Hunter would have lived happily ever after with Anne and Walt, but we don’t live in a perfect world. We live in a world built on the idea of family and second chances. By taking Hunter to Jane, Travis has given his wife and son a second chance at happiness. This comes at the cost of the happiness of Walt and Anne, but in the cruel, honest truth, such is life.

I don’t know if I can do justice to the combination of the visuals in Paris, Texas with the score by Ry Cooder. I am a fan of Cooder, that should be known. However, this is the first score of his I have heard, I’m not even sure if he did any others, and I loved it. The slow, deliberate nature of his slide guitar perfectly accompanies the languid pace of the narrative as told through the visuals. While the final twenty or so minutes are necessarily talkie, the first two hours are bereft of a lot of dialogue, using the visuals to advance the narrative more than words. This is only possible because of Wim Wender’s ability to mesh expansive shots with small shots. The drive of Travis and Walt being shown from Travis’ perspective inside the car with his eyes seen in the rear view mirror because Travis can only see himself at that point. When we look down from the top of the stairwell at Walt’s house to see the arrival of Travis and his head is obscured by a beam, it quickly dawns on you that we are seeing it from Hunter’s perspective and he has no idea what his dad looks like. Then you have the expansive shots of the Texas plains in particular. They are beautiful to look at, but at the same time they are damaged and desolate, just like Travis.

I could go on and on about the shot selection in Paris, Texas alone, but there is a limit to what I can type about. On that note, the solution is for the people who haven’t yet done so to make sure they experience Paris, Texas. The film does a much better job of getting its point across than I ever could with my words. There’s not much else to say, or a whole lot to say depending on your viewpoint, but I leave you with another hearty thanks to that fine lass Worm@Work for getting me to finally see Paris, Texas, it was well worth the time and it will be well worth your time to see it as well.