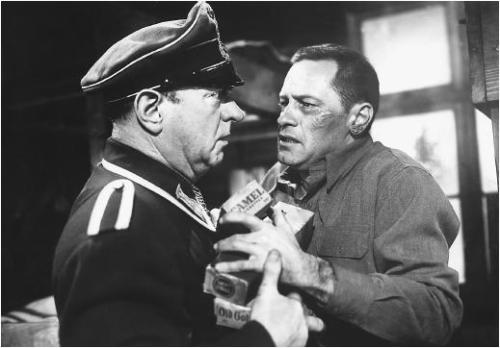 It’s odd to be doing a World War II marathon and come across a Billy Wilder film I’ve never seen, but until this marathon somehow Stalag 17 had eluded my eyes. There wasn’t any reason for not having seen it, somehow it fell through the cracks and managed to be one of the handful of Wilder films I had yet to discover. This is why I love participating in marathons, not only do I get to delve into a subject matter I like, but I get to discover a film by a director I am very fond of. In typical Wilder fashion, Stalag 17 covers a topic that is very different from what Wilder fans have come to associate with the director, but does Wilder handle the foray into WWII swimmingly, or does he sink?

There are times when the water gets a little too choppy for Wilder to handle, but he stays above water more than he does below. When the script was typically Wilder slick and went with small jokes based on character interaction it was quite humorous. The moments when the jokes were extremely broad and too big bogged the movie down because they didn’t feel like they belonged. Those moments felt too much like the movie I have often heard Stalag 17 compared to, MASH. Don’t worry, it’s only in those moments, because in every other way Stalag 17 is a great movie while MASH is an unmitigated disaster. Most importantly, those moments of broad comedy aren’t often, and neither is the other main detriment to Stalag 17, the narration. I’m not entirely opposed to narration like some are, but the narration in Stalag 17 feels unnecessary and the movie would have been better off without it.

The strength of Stalag 17 comes in its characters and the way the characters help to wed the comedic elements with the serious moments. I hesitate to label Stalag 17 a black comedy, but that is what it most reminded me of. It isn’t a black comedy because it’s mean, but rather it’s a black comedy because it is serious but finds the comedy in this serious situation. This is only possible because of the aforementioned characters, and the glue is clearly William Holden. His lack of caring initially, his razor sharp wit and his eventual heroics tie the comedic with the emotional. It may seem odd to think of it that way, but Holden’s character is the rock that we tether ourselves to and so does the story.

I don’t think Stalag 17 belongs with the truly excellent Wilder films, but it is a great film nonetheless. It’s yet another unique entry into the filmography of Billy Wilder, with some great performances highlighted by the great work of William Holden. Casablanca still holds the top spot in the marathon for me, but Stalag 17 is the best entry I’ve seen in a while and a movie I’m glad the marathon led me to.