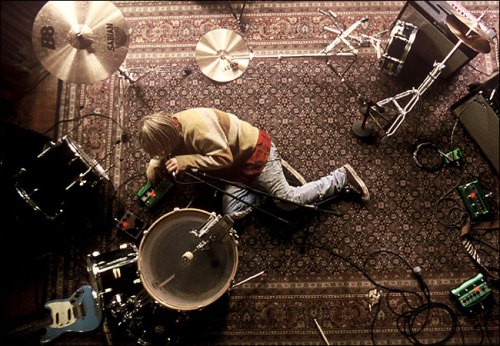 Any movie that lets me see Asia Argento’s bare ass is bound to be worth something!

I think it’s obvious to everyone that Blake is Kurt Cobain and that this is Gus Van Sant’s ode to Cobain’s final days. It’s not a retelling of his final days mind you, but an ode to the myth and burgeoning legend that was Cobain. I guess I should preface with the fact that I am a huge Nirvana fan and I do view Cobain as a musical genius. That being said, I was never under Cobain’s spell, I came into Nirvana too late in the game and I’ve never been a fan of the cult of personality mentality. Genius he may be I always viewed Cobain as a man, a man who ultimately made the wrong decision and paid the price for it.

I’m not sure if Van Sant was a Cobain fan and I don’t think that really matters. Last Days is about a man, not the person on stage with Nirvana. Blake as Cobain isn’t someone we are supposed to understand and I don’t believe Van Sant is trying to make us understand anything. Don’t get me wrong, Last Days is a movie full of messages and subtext, and there are certain understandings that will be found, but just like with the killers in Elephant Van Sant doesn’t try to apply any motives to the actions of Blake. We aren’t meant to understand why he chooses to die, how he comes to be the way he is or what his each and every action means.

Speaking of that subtext, there are a few examples of subtext that piqued my interest. Early on we see a couple, I believe it is Asia and Luke, in bed oblivious to the actions of Blake currently framed in their window. It’s possible that this speaks to America being asleep to the true nature of Kurt Cobain. The house Blake lives in may be large and palatial, but it is dirty and grimy, possibly representing the unseen truth behind the myth of Cobain. The camera pulls away from Cobain while he plays his guitar in one scene, and stays a stationary safe distance in another guitar scene. These are possibly the two most poignant moments in all of Last Days for me, showing how personal Blake/Cobain’s relationship is with his music. No matter how hard we may try, no matter how many interpretations we may place upon his music we will never understand it the same way that he does. To get even more meta, those scenes turn around and apply the same logic to the film. I can write and write all day long about Last Days but I will never understand the film as much as Van Sant does, that is how personal the film is to him.

I didn’t have a favorite aspect of Last Days, however among the many trinkets that wowed me the way Van Sant played with time, space and dialogue had the most impact. The movie comes in fractured scenes or different viewpoints of the same scene, the viewer is never able to get a solid grasp on what is happening or when and where. The dialogue can be understood at times but for the most part it is unintelligible. Van Sant doesn’t want to give us any excuses or reasons for what we are seeing, hearing those utterances won’t give us a deeper understanding of Blake’s life. We are meant to take in Blake’s life, not to try to apply meaning to it or attempt to decipher his actions. The movie is in a constant state of well crafted chaos, the lives of the characters lack any real shape, the time, space and dialogue reflect this.

Last Days is the final film in Van Sant’s minimalist trilogy, and while I don’t think it quite reaches the heights of Elephant, it certainly comes close and is a fine film in its own right. Last Days features a director at the top of his craft, constructing a film that is under his complete control at every second and should speak to its audience on numerous levels. Last Days is about thinking, it is about the lack of meaning behind most things, it is a personal work that seeks not to grant more understanding but to bring to our eyes and ears the personal take of Gus Van Sant on the subject at hand.