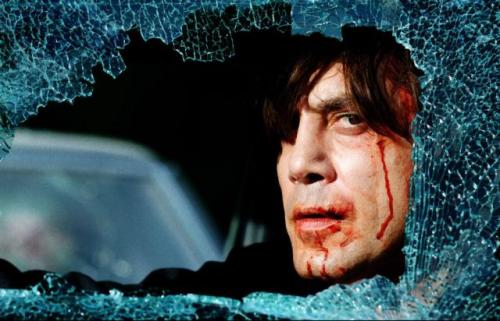 The film that many proclaim to be the Coen Brothers masterpiece!

Sometimes I take plenty of notes when watching a film I plan on reviewing, other times I take very few notes. When No Country For Old Men finished I looked over at my note pad and realized I hadn’t written a single thing down. This being my second go around with No Country For Old Men I can only assume that my familiarity with the material was partially responsible for the lack of note taking. The rest I chalk up to a film engrossing me so completely that I didn’t feel the need or desire to jot down any notes.

I am a terrible judge of time when it comes to movies. I will look to see how much time has elapsed in a film and realize that only fifteen minutes had passed by, quite a lower number than the forty minutes I thought had passed before my eyes. I always do this, I don’t know why but I always think that much more time has passed than actually has. Beyond all the usual accolades tossed in the direction of No Country For Old Men, I found it a highly engrossing film. It’s a very pensive film, it takes its time in frame after frame, but it isn’t a static film. It sounds weird to say I was on the edge of my seat during No Country For Old Men, but I was. My problem with judging time took a spot on the back burner during No Country For Old Men, a sure sign of an engrossing picture.