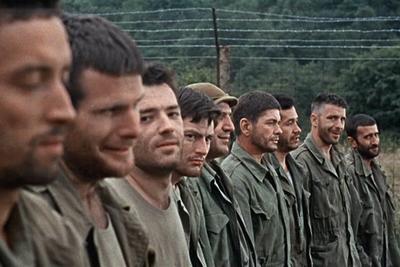 I love movies that make me think, movies that challenge the way I view cinema and my general outlook on the world. However, every once in a while I’m not looking for that type of movie. I’m not looking for ambiguity, thematic struggle or any sort of historical accuracy. What I am looking for is a straight kick in the teeth, a chance to watch men be men and blow shit up. The Dirty Dozen fulfills that need, it fulfills that need in spades, even if it is lacking a tad bit in the creative death department.

There honestly isn’t much more to The Dirty Dozen than straight up machismo action. I’m not going to launch into paragraphs breaking down why this character does that or the cinematography, or any cinematic virtues. That’s not a knock on the film, it just happens to be that simple and that easy to break down. There are good guys and there are bad guys, every man we see is a meat gnawing tough guy and the good guys will triumph in the end or at least have a glorious death. Simple isn’t it? Don’t let that fool you, The Dirty Dozen doesn’t need to be complicated, its greatness resides in its willingness to be simple and cater to the simple joys of good guys kicking ass.

I will admit that there were a few instances where I felt like the film took on too much of an incredulous tone. Foremost being the scene when Col. Breed invades the compound of the Dozen. I understand why that scene took place, but it felt too over the top in a movie that had plenty of over the top scenes. Maybe the problem isn’t in the idea behind the scene, but the execution. All I know is that scene didn’t work for me and there were a few other similar moments that didn’t work for me either.

I don’t want to sound like I am talking down to The Dirty Dozen when I call it a simple movie, but that’s really all it is and that simplicity is all that makes it great. People die, gun fights take place, explosions are to be found and laughs are all over the place. The Dirty Dozen isn’t so much an action movie as it is an old time tough guy movie, and The Dirty Dozen is one tough cookie of a movie.