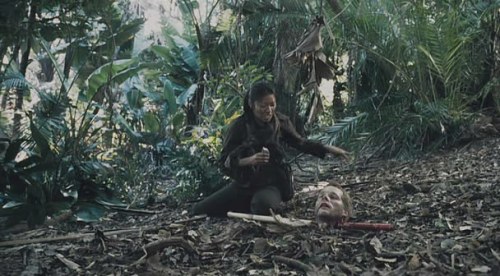 I want to take you to a Vietnam that may not have ever existed!

You may be thinking to yourself, “Why Bill? Why are you reviewing another Uwe Boll film when there are so many great films that you have yet to get to?” The answer to that is simple, and if you know me, you know what I am about to say, I love the work of Uwe Boll. He has one movie in particular that transcends the “so bad it’s good” moniker and is so bad that it is legitimately a great film. He also has one movie in Postal, that I have yet to see, that is supposedly good in an, ummm, good way. I won’t harp on this every time I review a Boll film, but I will review them because I believe he does something that is sorely missing from film today, he makes terrible films that are terrible in the best possible way. I get a huge kick out of watching his movies, and Tunnel Rats was no exception.

There’s no need for me to go too in depth about Tunnel Rats, it is what you think it is. If you want bad dialogue, suffocating camera work, hilariously awful meta moments and some of the worst acting you will ever see in a film then you can’t go wrong with Tunnel Rats. I’m not going to delve into any of those realms for this review, but I will touch on possibly my favorite “Fuck, Boll is insane,” passing thought. At some point it began to occur to me that Boll didn’t bother to do any actual research on the Vietnam conflict. His research consisted of watching Platoon, Apocalypse Now, Rescue Dawn and The Descent and then saying, “Screw all this good shit, we need inept American soldiers randomly shooting at shit and Asians who have two lines in the entire film.” The fact that Boll has the audacity to make a film so fraudulent about such a monumental event in modern history is a testament to his awesomeness and the awesomeness found in the terrible work that is Tunnel Rats.

That’s all I have to say really, there isn’t much need for a wrap up paragraph. Tunnel Rats is awful, but it’s awful in the best way. If you enjoy movies so bad that they are good then Tunnel Rats will be enjoyable for you. It is lesser Boll, but still good Boll, and you can never get enough of the good Boll, and with that I bid you adieu.