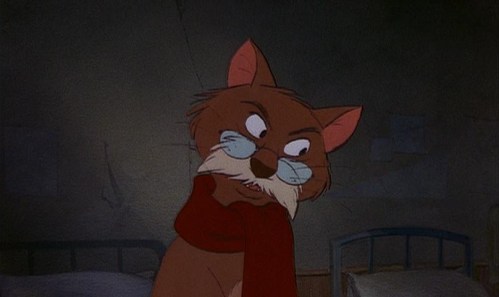 Movie #24 in the Disney Animated Marathon features an awesome cat, an albatross, and something that’s supposed to be a lady!

It’s too bad I’ve used my “I’m having trouble thinking of what to say” opening so many times because it would be the perfect bridge for my discussion on The Rescuers. My thoughts are flowing freely, don’t get me wrong, but I wasn’t able to find the same type of cognizance in The Rescuers. The simplest, easiest and most honest complaint I can levy towards The Rescuers is that this is a film that is unsure of what it wants to be. It’s a product of its age, The Rescuers screams 1970’s throughout, but it’s also trapped in-between eras. It’s as if Wolfgang Reitherman and company were afraid to break away from the standard happy woodland animals Disney setting for a more modern approach, but still made some misguided attempt to do as such. The result is a film that is perpetually switching between two different approaches, and while it fails at meshing the two stylistic approaches together it also fails at capturing the essence of either the modern or the classic in any way.

As characters go The Rescuers doesn’t have much to offer, Bernard and Miss Bianca could have been delightful characters but we aren’t allowed to spend a lot of time with them. They are on screen a lot, but they are rarely doing anything and it’s criminal that their interactions are kept to such a small number because I thought the film soared highest when they were interacting with one another. There are also the characters of Evinrude, Orville and Rufus, all of which were fine characters but again we didn’t spend enough time with them. I’m not a cat person by any means, but Rufus owned, yet sadly he was here and gone as fast as the movie could move him out. Perhaps the characters could have been given more time to shine by cutting out the three, I think it was three, highly forgettable songs laced throughout The Rescuers. I know that Disney animated features are, ahem, known for their song and dance numbers, but the ones found in The Rescuers didn’t just lack inspiration, they were, well, I don’t want to sound mean, but, pathetic.

I know I’ve been awfully harsh to The Rescuers, it is a film that Dave Kehr and others think of as the golden nugget among the rather pedestrian Disney animated offerings of the ’70 and early ’80’s. Then again Kehr and others of his ilk dismissed the awesomeness of Robin Hood, so their take is one I disagree with already. When I think about The Rescuers I have a hard time thinking of what worked for me, instead my mind immediately shoehorns in on what didn’t work. Whether that is Madame Medusa, the songs, the far too plain animation or something else, no matter how hard I try my thoughts come back to the negatives of The Rescuers. I can safely say that The Rescuers is one film in this marathon that I was already forgetting mere moments after it was over, and that’s never something I want to say about a Disney animated feature.