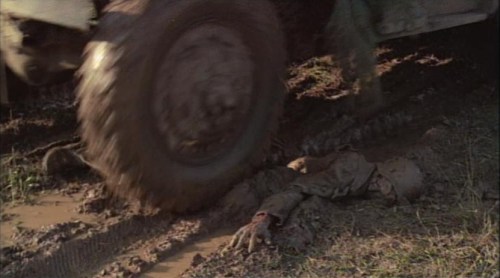 Film #29 in the World War II Marathon brings me back to the world of Sam Peckinpah, and what a messed up world it always is, a lot like our own world actually!

A very wise man recently made a point that I find myself agreeing with the more I think about it, most anti-war movies are inherently pro-soldier. Looking back at most war movies I am a fan of that happen to have anti-war messages I am finding that those movies hold true to this point. Despite it’s brazen disregard for military officers Cross Of Iron would also fall into the anti-war/pro-soldier category. Sam Peckinpah loves the common soldiers, it’s the officers he can’t stand. I don’t think the anti-war/pro-soldier theme is a major one in Cross Of Iron, or most war movies actually, but it is there and recognizing that does add another dimension to the film.

It wasn’t until near the end of Cross Of Iron that it’s main thematic push became obvious to me. Steiner represents Germany itself, his platoon represent the German people and the film is one long and bloody march towards the end of German culture as we knew it prior to World War II, especially the entitled upper class as represented by Stransky. Hey, it’s only my interpretation and I’m sure some will disagree but as I thought back on what I had just seen in Cross Of Iron the connection became more than simply tenuous in my brain. Think about those final moments, how bloody and over the top the final fifteen minutes or so are. Obviously some of this is due to Peckinpah’s inherent style, but I believe the over the top nature is essential in sealing the nail in the coffin of the German people. As Steiner sees his platoon cut down around him it’s Germany realizing that she has led her people astray and they are paying the ultimate price for her folly. This is followed by Stransky’s ineptitude in battle, the death knell of the German aristocracy is shown in that ineptitude. Their time has passed, they will not be continuing into the next era because they aren’t ready for it. Like I said, maybe you don’t share my interpretation, but it’s one that takes the film to another level in my eyes.

Cross Of Iron does delve into other themes as well, most notably Peckinpah’s favorite, violence. As per usual Peckinpah takes an unusual route in regards to violence, he shows it in its brutal honesty but he doesn’t condemn the acts as much as he does the people committing the violence. This Peckinpah centric take on violence almost removes the anti-war undertones from Cross Of Iron, if as Peckinpah puts forth violence is within all of us then can one really be against a perpetrator of violence such as war? I know the two points I just put forth are rather contradictory, but violence, and war, is a contradiction within human existence. Peckinpah presents contradictory scenes and moments because he understands how messed up violence is and how messed up our view of violence has become throughout the years. It remains a treat to watch Peckinpah take on the idea of violence and human nature, there isn’t another director I can think of who shows as deft of a hand as he does on the subject in question.

I’ve come this far in my Cross Of Iron review and I have yet to mention my favorite aspect of the entire film, James Coburn. I know people, myself included, toss around the term underrated a lot, but Coburn is such an underrated actor. I don’t ever think of him when I think of great actors, but I really should. He could have made Steiner a gung-ho soldier, or so anti-war as to make the movie heavy, but he finds that perfect middle ground where Steiner is equal parts normal soldier and message delivery service. Coburn melts into the role of Steiner with ease and I’m going to dare to say that without his performance Cross Of Iron would fail to succeed on any front.

I think that just about covers my thoughts on Cross Of Iron. It is yet another example of why I love the marathon format, without this marathon the chances of me ever taking the time to see Cross Of Iron spiked at about zero. Yet thanks to this marathon I was treated to another Peckinpah treatise on violence, his lone war film, and an authentic recreation from a side and place of World War II that isn’t often covered in film. Cross Of Iron is a bit rough in a few moments, but what would a Peckinpah film be without a little roughness? All I know is that you should check out this World War II film, because nowhere near enough people have seen Cross Of Iron. Oh, one last thing, make sure you see the widescreen version released a few years ago and avoid the butchered pan and scan version that was readily available for so many years.