Review: Sen To Chihiro No Kamikakushi (Spirited Away, 2001) 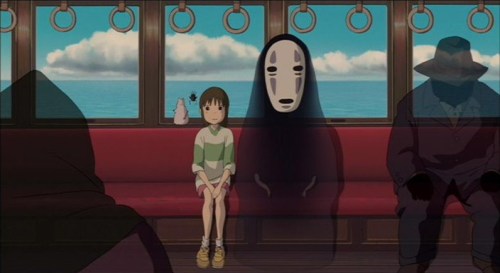 My review of this one has been a long time coming, I actually put it off numerous times because I was afraid I wouldn’t be able to do it justice, and now it’s time to see if the wait was worth it!

I would hope by this point in time that anyone who knows me personally or simply reads my blog would know that while I have certain directors I love, there is one director I place on a pedestal above all others. That director is Hayao Miyazaki, and said pedestal placing is the exact reason why I put off reviewing Sen To Chihiro No Kamikakushi for so long. Many view this as his magnum opus, the film that highlights all that Miyazaki is about as a filmmaker. I can go along with that viewpoint, although I view all of his films so highly that it is a constant battle in my head over which one is actually his magnum opus and finest work. Still, as much as I may love Tonari No Totoro, I’m not foolish enough to believe that among the masses that particular Miyazaki effort is given anywhere near the amount of attention and praise as Sen To Chihiro No Kamikakushi. It is because of all the attention, and aforementioned pedestal placing, that Sen To Chihiro No Kamikakushi has received since its release that I waited until now to review it, and I only hope that my minuscule words can come close to describing this master work.

Picking out a place to start my review of Sen To Chihiro No Kamikakushi is proving rather difficult, I have all of these powerful emotions waiting to gush out of me and on every facet of the film. Heck, picking out a screenshot to use for the review was hella hard, pouring through the beautiful imagery of Sen To Chihiro No Kamikakushi and trying to choose just one that encapsulates the film is a Herculean task I would never wish upon another living being.

The pool has been drained a bit and rising to the top of the murky waters are the themes found in Sen To Chihiro No Kamikakushi. Miyazaki touches on some of his favorite themes, modernization, the environment and the changing of the times, but the theme I want to talk about is that of a young girl coming of age. There isn’t another director in the history of cinema who understands children, specifically young girls, as well as Miyazaki. Chihiro’s change isn’t just believable through her actions, but it believable visually and in our hearts. She is learning life lessons every step of the way in Sen To Chihiro No Kamikakushi, but Miyazaki knows that a film full of life lessons could be preachy so he turns her learning into an adventure. And what a grand adventure it is at that, it is very possible to forget about every theme Miyazaki wants to impart and simply become lost in Chichiro’s adventures in this magical world.

11 responses to “Review: Sen To Chihiro No Kamikakushi (Spirited Away, 2001)”