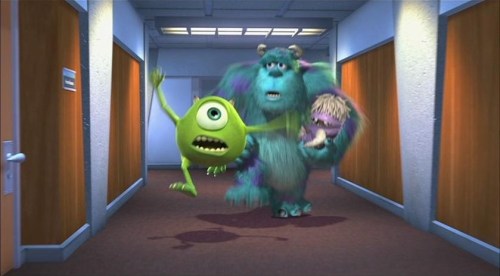 After nearly a year I finally come to my senses and return to my very unofficial Pixar Marathon, and I am so happy I finally stopped being a dolt!

Monsters, Inc. is so effortless in its function, in its presentation that it doesn’t surprise me that it has achieved a sort of forgotten status among the great Pixar library of films. A Bug’s Life may be the king of forgotten Pixar gems, but A Bug’s Life is also a very good, but not great film. Monsters, Inc. on the other hand is a film that should be remembered as an instant classic and yet another example of the exemplary film making that Pixar has become well known for. Yet that has never happened and as the years have passed since Monsters, Inc.’s release it has faded into a sort of isolated obscurity. People know it exists, they remember it fondly, but it doesn’t really stick with them or immediately come to mind when they think of the Pixar canon.

I am here to tell you, as well as remind myself, that any such thinking is frankly, crazy. As I initially stated, Monsters, Inc. remains perhaps the most effortless release from Pixar to date. Toy Story 2 may be better, WALL·E may very well be the greatest animated film of all time, but even in those two classics you can sense that Pixar is trying for something, that they are making an effort to produce a great film. That is not the case with Monsters, Inc., it is that rare breed of film where every goal the filmmakers set out to accomplish is reached and then some but it is reached so easily that it appears as if no effort at all was required. This feeling creeps in right from the second Monsters, Inc. starts and by the time you realize that you are forty minutes into the film and yet it feels like nary a minute has passed by you realize that Monsters, Inc. is drawing you in and entertaining you without even trying.

The effortless nature of Monsters, Inc., however, does make it a tad difficult to review. It’s hilarious, but it achieves its high levels of hilarity so easily that I am left with very little to say about why it is so funny. The same is true of the voice work, the animation, the world design, the music, the homages, the story, and the deeply rooted message about the power of laughter, family and being happy. But, you people read what I write for a reason, a reason I have yet to figure out, so it is up to me to provide you with a bit more than, “Uh, it was effortless and, uh, really great, yeah.”

It begins with the world creation, we have TV commercials, monsters galore, and a clear 1950’s pastiche to hearken back to when monsters were truly scary and a part of the wholesome American lexicon. I have spoken before of how imagination is the greatest thing a person possesses, and Monsters, Inc. thrives in the world of imagination. It throws so much at the viewer, but it works, every second of this bizarre and zany world works because Monsters, Inc. believes in its own world and that leaves the viewer with no choice but to believe as well.

From world creation we move on to the most obvious of exemplars, the animation that Pixar has become so famous for. I know that Pixar viewed the hair on Sully to be their big accomplishment with Monsters, Inc., but I beg to differ with those great men and women. The key indicator of how amazing the animation is in Monsters, Inc. can be found in the lone eyebrow of Mike Wazowski. Through that lone brow he expresses so much- anger, frustration, bewilderment, laughter, love, hurt- he runs the gamut of emotion all through one singular brow. The world around Mike is vibrant and wonderful looking, but what Pixar manages to do with that brow is simply astounding.

Beyond the brow there is the voice acting of John Goodman and specifically Billy Crystal. Those who doubt the power and legitimacy of voice acting need look no further than what Crystal brings to the table as Mike. He is wild and over the top, but he is consistently funny and in many ways becomes the anchor of the film due to Crystal’s inflections and tones. But it doesn’t end with Crystal. Goodman is tremendous as well, and Mary Gibbs as Boo is simply precocious and cute in all the right ways.

Writing a review of any Pixar film is always a daunting task, there are only so many superlatives one can unleash at any give time after all. Monsters, Inc. challenged my writing skills, but it amazed me as a film. Monsters, Inc. is very simple, but it is a film that children will love while also captivating adults with its humor and layered storytelling that I believe was clearly lost on many critics, specifically one louse from Chicago who did nothing but make me yearn for Gene Siskel to come back from the dead for a few years until thankfully he left my TV screen for good. Alas, my tangent distracts from what really matters, the greatness that is Monsters, Inc.. I said it in the beginning of this review, the middle of this review and I’ll say it again at the end of this review. Monsters, Inc. isn’t just a great picture, it is an effortless wonder from Pixar, a film that grows on you with each repeated viewing. Monsters, Inc. is funny, sad, looks beautiful, draws you into its story and its world, and it does all of this without lifting a finger to try. Maybe you are like so many others and have forgotten to give Monsters, Inc. its due, or maybe you just need to visit with this wonderful picture for the first time. Whatever the case may be it’s time for you to embrace the scares and the laughter of Monsters, Inc., and realize yet again why Pixar continues to remain neck and neck with Studio Ghibli for best animated studio going today, maybe even of all time.