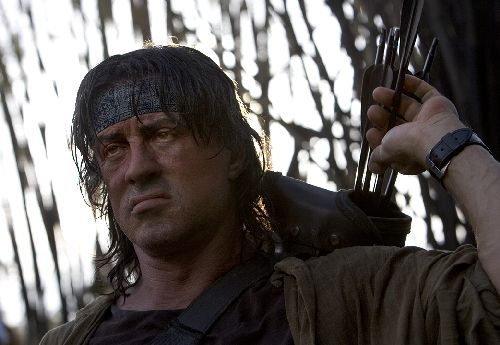 This is the end, the end of a franchise and the end of our Rambo Marathon, and I shall once more, shed sloppy tears until I get to work with Edgar, yet again!

For a point of reference make sure you first read Edgar’s Rambo review over at Between The Seats so you know what I am talking about.

I’m a bit late to the party, I know. But life happens sometimes and that’s why this rebuttal has been sitting dormant on the dashboard portion of my blog for a long time. In a way, that relates to Rambo, and it relates to this very Marathon (by the way I still haven’t decided if I want to make the switch from using Marathon to Festival, but either way I have decided the word I use will always be capitalized, because I have the power to do so) because yet again Edgar and I find ourselves in agreement. I could nitpick sure, I could go after little tiny moments that Edgar liked and say, “well, they didn’t really work for me, Edgar.” But, I’m not that type of guy, and this Marathon has been a bit of life happening because once again Edgar and I both liked the movie in question.

In the case of Rambo, I do think you were a bit more smitten with the movie than I was. I enjoyed it, I loved Stallone’s nihilistic tendencies, but at the same time I didn’t find the end as cathartic as you did. I could blame this on the fact that you are an Allouettes fan, but they have been winning so I will not hold my ground with that argument. I could blame your for being Canadian, but I just divulged the fact that I like the Canadian Football League, so no dice there. I think, and feel free to correct me if I am wrong, that you were taken in more by Rambo because you found the franchise as a whole more heartfelt and sincere than I did?

Yeah, there isn’t a lot we can get into when it comes to Rambo. I enjoyed Sly’s directing as much as you did, I know that we agree on the fact that he has a handle on this character and this universe. You and I both see the emotion that is present, but the one area where we differ is in the sincerity of that emotion. I’m not saying Rambo isn’t a sincere movie, it most certainly was. However, unlike you I was not touched by its sincerity, I enjoyed it, I went along for the ride, but when the film stopped that was it for me. You give me the impression that you kept going, that this character gave you something to think about, and I can’t say the same.

Another Marathon is in the books, and I have no problem saying it was another smashing success for the two of us. We agreed again, but great minds do think alike. If all this Marathon did was allow the two of us to rediscover the world of John Rambo, then it was a Marathon well spent. Next time out we shall have to choose a series of films that have more of a chance of seeing us disagree. Either way I have no problem allowing my little Canadian friend to hitch a ride on my back one more time, because let’s be honest, everyone knows I carried you! And with that, I bid you adieu, let us celebrate the fun time we had with Rambo and prepare for the Marathons to come, and remember one thing, we rock yo!

There’s more, make sure you head over to Edgar’s blog to read his rebuttal for Rambo.