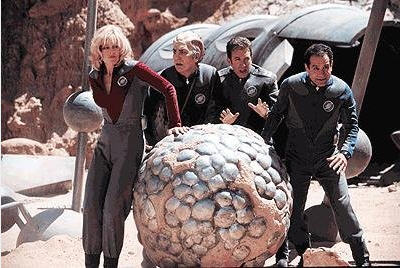 A kid movie, a space adventure, a serial killer, this entry in This Week In Cinema has it all!

Another decent selection of movies this week. I’m hoping to get to a few movies I plan on doing full write-ups on soon, but I’m really digging this new feature for the films I don’t feel like giving the full Bill treatment to. Anyways, one of my all-time favorites is in this selection of films, so enjoy…

I am not the target audience for this film. That honor would belong to my four year old daughter, but I’ll be damned if this isn’t a fine piece of entertainment for her. It would be all too easy for me to dismiss this movie, because it never did do a whole lot for me. But, it’s not for me, and the little girl who it is for can’t get enough of it. Rainbow Brite And The Star Stealer is harmless fun that my little girl loves, and that is all I need to know.

I’ll keep this short and sweet. If you like the Muppets, then you will like this movie. It misfires a lot, it’s really cheesy, and occasionally it is downright bad. But, at the end of the day I enjoy spending time with Kermit the Frog, as everyone should. There’s something about the Muppets that is eternally engaging to me, even when they aren’t at their best I still want to see what they have to offer and I always have a good time.

Don’t ever believe the people who tell you Tim Allen is a terrible actor. Yes, he has been in his share of bad movies and he has provided a number of cringe inducing performances. But, Galaxy Quest shows just how great Allen can be as a comedic performer. His sense of timing is really something to behold in this film. I can’t think of a single scene where he didn’t look at the camera at the perfect moment, or spout off a one liner just when the film needed it, and so on. And that’s just Allen, the rest of the cast is great as well. I loved watching Alan Rickman let loose with his comedic chops, and the entire idea of Sam Rockwell’s character is funny, but when played by Rockwell he’s even funnier than the idea I think. There’s also plenty of good old fashioned science fiction and action fun to be found in Galaxy Quest. Any fan of science fiction should love this movie, it really gets the weird relationships that grow between cast members on a sci-fi show, fans and the actors and the weird way the actors, at times, think of the show they are on. With each viewing of Galaxy Quest I inch closer to giving it the full monty, it’s that great.

Have I mentioned that I hate my English class this semester? Well, I do and movies like this are why. That’s right folks, I got stuck in an all-documentary semester of the class, and we’re not even taking on documentaries that sound interesting. Oh no, instead we get this garbage. I’m sure that the original The Concert For Bangladesh was something to behold, with it’s line-up there’s really no way it couldn’t have been. But, Concert For Bangladesh Revisited With George Harrison And Friends is tedious, boring, and downright dull. This is what uninspired film making looks like. Don’t get me wrong, I liked the bits and pieces we saw of the performances, but we never see a whole performance and the rest of the film takes forever to say absolutely nothing. Concert For Bangladesh Revisited With George Harrison And Friends is forty seven minutes long, but those forty seven minutes felt more like four hours.

A lot of people will probably think I’ve rated this too high, or maybe not enough people have seen this to really care. I will admit that a lot about this tale is well worn, that it often drifts towards convention. There are more than a few moments that simply put do not work. But, amidst all of that there is Dustin Hoffman and Emma Thompson. I believed in those two actors and the characters they played. In such a small movie with such a tiny focus they manage to fit right in despite how big they are as actors. They have instant chemistry and as a result are a joy to watch. That is why I ended up feeling so highly of this movie, I loved spending time with these two actors, just watching them do their thing without ever exerting any effort. The movie was also shot quite beautifully, surprisingly so actually since I can’t recall ever hearing anything about this film beyond its two lead performances. In fact, Last Chance Harvey was a pleasant surprise overall, a pleasant surprise indeed.

The beginning of When Harry Met Sally… deeply frustrated me. The idea that you have to leave Chicago for New York because there’s nothing to do with your life in Chicago is moronic. But, I can’t really blame the movie or Rob Reiner for that, because the stupid notion of New York as some sort of mecca for civilization that no other city can hold a candle to has been prevalent in film for a long time now. Personally, I’ll take Chicago over New York in a heartbeat, one is a great city and the other is just a city. As for the rest of the movie, it can be cliche at times, and it is very schmaltzy when it wants to be. But, there’s a reason this is looked at as one of the great modern romantic comedies, it is very funny in a very romantic kind of way. I know that’s really simplifying the film, but that’s how I connected to it. I saw a lot of myself in Billy Crystal’s character, I’m not as neurotic, but I have a lot of the same bad relationship habits and personal tics he does. I could relate to When Harry Met Sally…, I found it funny, Meg Ryan was a treat to look at and she’s charming to boot. I guess I was destined to like When Harry Met Sally…, because as far as romantic comedies go this is right in my wheel house.

I totally see how this was supposed to be a silly, stupid send-up of the slasher flicks of the late 1980s. But, I can also tell that this film was written by someone who had never been to an actual summer camp or hadn’t ever bothered even reading up on what goes down at summer camps. It’s really stupid sure, and it is emblematic of the slow decline of the slasher film around this time. But, it feels off throughout because it comes across like a Hollywood back lot camp as opposed to an actual summer camp. Say what you will about the Friday The 13th series, but it always felt like they were in the woods, like they were at a camp doing the things that camp kids do. Alas, I will always have fond memories of Sleepaway Camp II: Unhappy Campers. It is the movie that taught an impressionable Bill that you could pop a tape into the VCR and see some boobies, and for that reason alone this is still an awesome movie in my eyes. 🙂

Don’t really know why I ended up watching this, I was searching for something a little shorter on Netflix Instant and this caught my eye for some reason. I’m blaming it on the allure of Kane Hodder in a role where he wasn’t playing Jason Voorhees, and maybe an interest in the story of Ted Bundy. But, having seen it I wish I hadn’t of bothered. Michael Feifer sure assumes that people know an awful lot about Ted Bundy because he doesn’t feel the need to contextualize anything. It’s really hard to get your bearings at any point in the movie. It’s hard to know where you are at, what time period a scene is taking place in and in a few scenes even whether or not what we are seeing is real or a hallucination of some sort. None of that is done intentionally though, it’s all very clearly shoddy film making. Oh well, I was hoping this would be a decent flick I stumbled across, but it was a lot of claptrap.

Not a good movie to end the week on, but otherwise a pretty darn strong week if I don’t say so myself. I’m especially happy any time I get to watch Galaxy Quest, that is a movie that I should give a full write-up to at some point in the future. As I said in the beginning of this here post, I am really digging this new feature, and hopefully you are too.