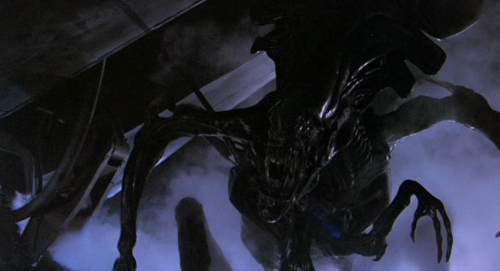 The second film in my third match-up in the second round of the 80s US Bracket took a while for me to get to, but it’s well worth the wait!

Sigourney Weaver owns her role as Ellen Ripley entirely, but what is often lost in discussion of her role is what all the actors around her do. In order for her to play the female heroine who is truly feminine and kick ass at the same time, the actors around her need to own their parts as well. Without the contrast of- the stoic Hicks, the cowardly Hudson, the testosterone driven Vasquez, the scared Newt, the bumbling Gorman, the cold Bishop, and the conniving Burke- Ripley would not have stood out as much as she did. Weaver needed those actors to bring it like they did, she needed to be surrounded by tough guy talk and stupidity to emphasize how much better she was. I have no doubt that Ripley would have been a strong character for women to latch onto if she were surrounded by a cast of equally strong characters. But, by placing her in a situation with characters who never meet the full potential of their humanity it makes Ripley realizing her full potential that much more satisfying.

That being said, I’m not sure if Weaver’s portrayal of Ellen Ripley was a game changer like so many tout it as being. I’m not a film historian, I’ve never claimed to be one. I can only go off of what I have seen and in that sense I’d call Ripley a return to the past if you will. In the mid-80s even the most popular of filmmakers, I’m looking at you John Hughes, and the best of films were not giving women an equal shake when it came to being strong willed, independent characters. That’s most likely why Ripley came across as such a breath of fresh air and ended up being viewed as such a game changer. But, I can’t help but look to the past and characters played by the likes of Maureen O’Hara or Katharine Hepburn and think of Ripley as being like them. Don’t misinterpret what I am saying, Weaver delivers an all time great performance, but I just don’t see it as the game changer that others do.

Of course, all of the above works in conjunction with where James Cameron’s film goes in regards to the idea of motherhood. In my review of Alien I discussed how it could be viewed as a tale of motherhood. In Aliens there’s no doubt we are watching a tale of motherhood, of two very similar mothers to be exact. There’s nothing to separate Ripley from the Alien Queen. Both are trying to protect and preserve their family, or family unit in the case of Ripley. This adds a tone of sadness to their inevitable confrontation. It is a well crafted final thirty minutes, but I found it to be heightened by the feeling of sadness that I associated with their showdown. Both are doing the right thing, both are functioning in the way that is best for their species and their families. However, one of them must lose, and that is quite the sad situation.

One area where the game wasn’t really changed but rather was upped a few notches was in the ability of James Cameron to craft a science fiction mythology. What I love about Cameron’s scripts is that he doesn’t feel the need to tell the audience everything. He could have explained where the aliens came from, or how they developed a queen all of a sudden. But, he doesn’t, he keeps the focus on the action and on the largeness of the situation we are in. Cameron knew all of the little bits of information about the world of Aliens, but he knew that we didn’t need to be bogged down with discovering them. Aliens is a world that you can take for what it is, and marvel at what you are seeing the whole time. Within the world of science fiction movie making it is always a joy when a director trusts his audience enough to not have to explain everything to them, but very few directors and science fiction films end up doing this.

One of the things I loved most about Aliens when I was growing up was how large and in charge the action was. As I’ve aged and watched the movie more I’m always surprised at how little action there is in Aliens. You have at the most five action set pieces, and in between you have all the motherhood and Ripley character moments I spoke of earlier. The action scenes are terrific, but they do not dominate the film like I used to think. The only blemish that I always shake my head at is the first time we see the marines in flight. The image from afar taken from behind of their transporter entering the atmosphere of the planet has always bugged me. It’s such a small gripe in a film that is full of otherwise spectacular CG and practical effects that I’m willing to overlook it. I can’t overlook the awesomeness of Bill Paxton’s final moments as Hudson, I could never overlook those moments. He hams it up to the nth degree and every second of his demise is a pleasure to watch.

Aliens isn’t just a collection of awesome moments, even if it does have plenty of awesome moments. James Cameron has directed a film that scores high marks with its action, characters, emotional resonance and ability to give a female a strong leading role in the testosterone driven 1980s. I’ve long debated which of the first two in the Aliens franchise is better, Alien or Aliens? As much as I love the claustrophobic horror of Alien, after this viewing of Aliens the pendulum has swung. I can’t get enough of the world Mr. Cameron has helped to further create, the things he did with his camera and the beats he hit with his story. All the tough guy talk in the world won’t save you from an unstoppable killing machine, but a woman caring for her family will. Pretty interesting stuff for what most view as a testosterone drive action film methinks.