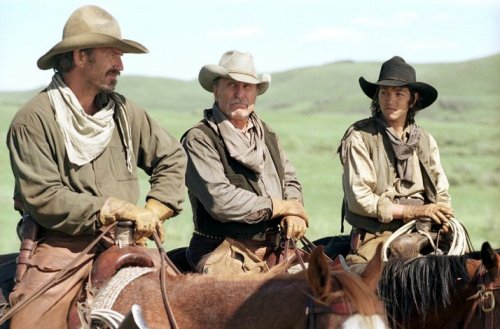 The penultimate rebuttal in The Shootout At High Noon Marathon won’t be much a rebuttal, I can guarantee you that much, pard!

For a complete understanding of what I am responding to make sure you go and read Edgar’s review of Open Range at Between The Seats.

Edgar, you leave me at a disadvantage. There’s nothing for me to rebut in your Open Range review. I agree with all of your points, not only do I agree with them but I found them to be very well written. This leaves me at a loss on how to tackle this particular rebuttal. I’m sitting in front of my dying computer at a complete loss about what to type. Usually I think for a bit and ideas on what to write or the words themselves just start pouring out of me. Not so this time my friend, the ideas remain hidden and the words are stuck behind a dam. What does a man say when he has nothing to say?

One thing I noticed as a recurring trend as I read through your Open Range review was the idea of beauty and tranquility. Your review read to me like you were surprised by the beauty and tranquility found in Open Range. I agree that it is a wide open film with luscious visuals, it’s also at home with itself and in turn creates a calm, serene, and peaceful setting. This aspect reminded me a lot of the Westerns of John Ford, yet at the same time Open Range is more calm in its visual surroundings than any Ford movie I’ve seen, sans The Quiet Man. There’s something about the greens of the grass and the blues of the skies found in Open Range that set it apart from even the calmest and most serene of the classical Westerns I have seen.

Another area of interest in Open Range that neither of us touched upon in our initial reviews are the comedic moments. I’m specifically talking about some of the darker moments, such as the campfire scene where Boss and Charlie surprise the men who have been watching them and the final death we see on camera. Watching the only Baxter thug stumble away from the townspeople as they gun him down is darkly comedic and damning at the same time. It’s clear that he has given up the fight, yet the townspeople still gun him down, and in that one small moment the townspeople are damned for their actions. At the same time the way Mr. Costner films the scene is very comedic, it calls back to similar scenes and moments in many a classic Western. The trick that Mr. Costner pulls is to make the scene comedic while at the same time presenting it in a way that is tragic, stopping the laughter and making the viewer question what they are seeing. Scenes such as this show the complete grasp Mr. Costner has of the Western and what makes it tick. He may not always hit his mark, but Mr. Costner surely knows where he’s aiming his Winchester at.

That’s it this time out, sorry, I know it’s not much of a rebuttal. I’m willing to call our little duel a draw this time out, let’s be honest we were both in agreement on this film to the point where our reviews almost mirrored one another. Your words of praise for Open Range were a joy to read, sometimes a rebuttal isn’t a rebuttal at all but a pat on the back for a job well done. You did good Edgar, I’m glad you were able to get just as much out of Open Range as I was, very glad indeed.

Read what Edgar had to say at Between The Seats.