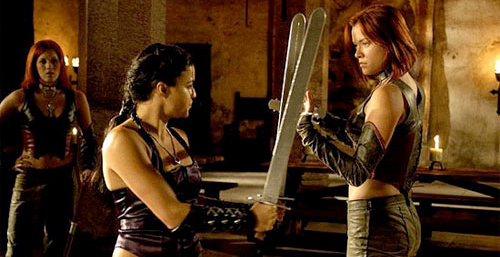 No film list would be complete without Uwe Boll!

I first watched this epic piece of fiction from the always amazing Uwe Boll with one of my only great friends, Kyle Anderson. We instantly fell in love with how schlocky and ridiculously over the top Boll had gone with his latest video game adaptation. I don’t know if guilty pleasure is the right turn of phrase for how I feel about BloodRayne, I like the movies I like and never feel guilty for a second about liking them. I do recognize that BloodRayne isn’t a well made film, but it is the best
“so bad it’s great” film I have ever seen. Blood is everywhere, a sex scene of immense proportions pops up out of nowhere, seven characters from the same country have seven different accents, and people are constantly hacking away at eviscerated bodies that have somehow retained life. BloodRayne isn’t a guilty pleasure, it’s a movie so awful that it’s great, it’s a movie I absolutely love in its entirety.