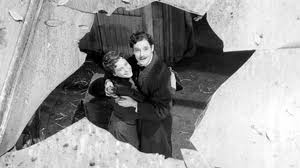 In this day and age of DVDs, Netflix, streaming, and torrents obscure doesn’t mean quite what it used to!

Day 28 – The Most Obscure Film You’ve Ever Seen

As the little blurb above alludes to, the film lovers of today live in a day and age where obscure doesn’t mean the same as it once did. As I searched through the list of films I have seen I noticed that the films that would be considered obscure aren’t all that obscure. I decided to forego a lot of the foreign titles because while they may be obscure where I’m from they most likely aren’t obscure in other parts of the world. Recent films especially I left off limits because they have an availability to procure that disqualifies them from being obscure in my mind. The choice I finally decided on is The Magic Box, a little seen drama from John Boulting about the pioneering of the film camera. The Magic Box isn’t a flashy film, it’s a well made drama, no more and no less. The Magic Box is a film that no one I know has seen, it has very few votes on The Internet Movie Database, and I never hear it brought up when discussion of film takes place. As a matter of fact I’m the only person I know who has ever said anything about the film, and that’s obscure enough for me.