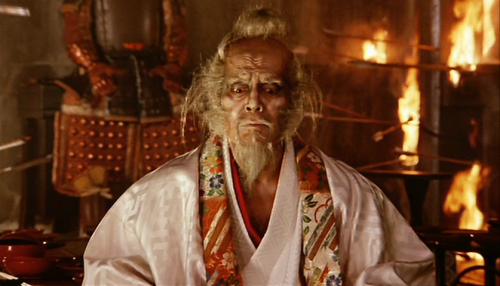 The Movie Dictator Club for the month of August, 2011 is a take on a play I have never seen, or read!

I’ve allowed my thoughts on Ran to brew in my head for a few days now. I admit that I never read, nor was I ever privy to any production of, King Lear. This has undoubtedly shaped my view of Ran differently than others and it’s created a scenario where I lack one of the key components most people use in interpreting the film. That King Lear is a source for Ran is but one component though, so I do not feel I come at the film from a place of ignorance. Rather, I’m coming at the film from a different perspective that is not taking the major source material into account, I’m simply commenting on what I saw in the film.

Ran is, at its best, the story of Lord Hidetora Ichimonji, and I tell you this not as a description of the plot. The reason why it matters that Ran is the story of this one character is because the film does falter in its middle when Hidetora is off the screen for far too long. The other characters are interesting, but they are less developed, less powerful presences, and lack the larger scope that Hidetora’s mere presence gives to the film. Watching Lady Kaede scheme and manipulate to bring about the fall of the Ichimonji clan is well done, but at the same time it lacks the immediacy of Lord Hidetora’s story. The shift that takes place in the middle ground isn’t something that can be done away with, those moments are integral to how the film comes to its conclusion. I don’t know what could have been done to shore up the middle section of the film, but something needed to be done to bring the focus back to where it belonged, on Lord Hidetora.

Speaking of the man known as Lord Hidetora, he has to have one of the most interesting faces I have ever encountered in cinema. There’s a perpetual look of shock on his face, it never goes away, it may get worse, but it never goes away. Hidetora’s face ties into what I loved most about Ran, the surreal nature of the entire film. In many scenes my attention was grabbed and held by the surrealism of the unfolding events. Take the battle scenes for instance, the color of the blood alone is enough to drive the surreal quote through the roof. The surrealism creates an atmosphere of silence, this is helped by the ambient score, where moments of action are punctuated by silence and long stretches of meditation. It all works beautifully, from frame to frame I was impressed with the control Akira Kurosawa showed over how out there his film was while never crossing the line into farce.

Those colors I talked of in the last paragraph are quite the spectacle unto themselves. The luscious robes of the characters, the almost neon red blood, and the loud battle standards that are used all look gorgeous. The colors feed into the surreal atmosphere, the bright flames of the arrows in one particular battle scene help to highlight Hidetaro’s face and show just how crazy the world has become. There’s also a moment when an ancillary character who we have not spent any time with is killed. Her death has no meaning by itself, but the way her blood splatters against the wall and lights up the room is impressive and calls attention to the surrealism that Kurosawa-san wants to impress upon the viewer. Not only do the colors look great, but they help to drive the motives of the film, ad allow the viewer to fully grasp the situation Kurosawa-san has plunged them into.

I ended up loving most of Ran, save the baggy (thank you Mark Kermode) middle. I know that the film is rather beloved among the hardcore cinephile community, and I hope that means other Kurosawa-san fans will tell me what they liked about the middle portion that I was not able to. I’m a sucker for surreal tales, especially when they have a high production value behind them. It’s no surprise that Ran was a hit with me, the color usage alone was enough to make me like Ran a great deal. I don’t know if Ran has spurred me into checking out King Lear, William Shakespeare and I are not exactly intimate associates, but it is one heck of a great movie that I am glad to have watched.