Now, on to this years festivities,

Here are the thirteen eligible films,

The awards are simple, I nominate some stuff in different, colorfully named categories, and some stuff wins, it’s that simple,

I do like me some boobies, this is the category for boobies, if you don’t like that all I have to say is that this is my blog so deal with it yo,

A weak year, yet again, for boobies, but that’s what comes with watching a higher class of horror movies I guess. To be honest among these nominees there’s not much competition. It’s either Alexia or the panty murder victim and in the end the panty murder victim from L’uccello Dalle Piume Di Cristallo takes home the Bloody Machete with the better boobies.

Below is a clip from L’uccello Dalle Piume Di Cristallo of the panty murder scene. Sadly it’s the badly dubbed English version, but the awesome score is still present, and most important a few minutes into the clip so are the awesome boobies,

These five nominees represent the best of the best when it came to this years gore,

1) Captain Rhodes is ripped in half – Day Of The Dead

There was a surprising lack of gore this year, but I didn’t watch a lot of gory movies this time out. Of the movies I watched one stood out in the amount of and different ways it presented gore. However, that movie did not have the goriest scene, instead the goriest scene was found in a much simpler movie and in a much simpler moment. When Edna’s face is removed in Les Yeux Sans Visage I cringed at the realistic gore. The blood didn’t splatter, but it was easily the goriest out of all the movies I watched this year, give that lady without a face the Bloody Machete.

Below is a clip of Edna having her face removed, you’ll find the cringe worthy gore right at the very end,

Do Not Stick That Stake Through My Heart (AKA Best Death):

People die in horror movies, but who dies the best, that is the question,

3) The Policeman is slowly chomped on – Let Me In

Sometimes horror deaths are brutal, other times stylish, and still others just happened. This year there were once again a lot of deaths, and a lot that could have wound up being nominated. I was leaning towards the more artistic or symbolic deaths, but in the end I went with a good old fashioned violent death. The Bloody Machete goes to Haute Tension and the absolutely brutal scene where the dad’s head is ripped off by a dresser.

I couldn’t find an isolated video of the dad’s death, but the video below has a bevy of the deaths that take place in Haute Tension, including the dad’s meet-up with a dresser about a minute in,

I Swear I Didn’t Just Piss My Pants (AKA Creepiest Scene):

I don’t find horror movies scary, but they can be suitably creepy, and trust me, creepy and scary are two very different concepts,

4) Peter first shows up for some eggs – Funny Games

Always a tough category, yet again picking one moment that was creepier than all others proved very difficult. There were a few different types of creepy this year, from disgusting creepy to haunting creepy. I decided that there was one moment that stayed with me more than any of the others, one moment that creeped me out when I was least expecting to be creeped out. The Bloody Machete in this category goes to Christiane in Les Yeux Sans Visage deciding to stare right into my soul with her creepy blank face.

No video this time around, but a video isn’t needed. Just look at those creepy eyes and that blank face, that’s all one should need to be sufficiently creeped out, 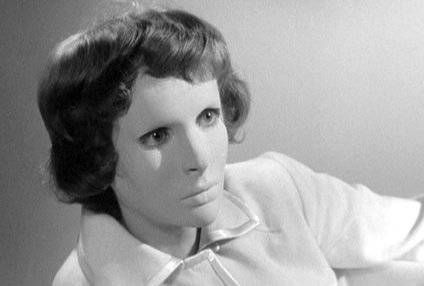 My Guts Would Spill Out From Laughter If You Hadn’t Already Hacked Them Out With A Machete (AKA Funniest Scene):

Everyone likes to laugh, so let’s have a laugh,

2) The wheelchair chases Claire – The Changeling

More slim picking this year in the comedy category, I guess I need to pick more comedic based horror films. There may not be many of them but the actual entries are all strong, each hilarious in their own way. My heart of hearts wants to go with the judo chop because, I mean, c’mon, it’s a judo chop! But, the realist in me knows that wasn’t the funniest moment from this years fest and that’s why the Bloody Machete for funny goes to that damn wheelchair from The Changeling.

Watch the wheels spin when a demonic wheelchair decides it needs to go on the attack,

Your definition of a villain may vary, but these are the villains that made this years Fest work for me,

I wasn’t sure where to go with this category this time around. I think I settled on a good group of villains, but at the same time they are such different villains. I was especially struggling with the idea of what makes a horror villain, and to be honest I couldn’t come up with a concrete answer. In summation, each villain is awesome in their own dastardly ways, but one villain truly made my skin crawl with his evil deeds. The Bloody Machete for dastardly evil goes to Paul from Funny Games.

This clip gives a nice taste of how purely evil Paul is as a character, especially of note is the slick way he talks, I feel that adds a lot to his general villainy,

If This Were The Oscars This Would Be A Prestigious Award (AKA Best Performance):

There are some really great horror performances out there, these happen to be some of them,

I love me some great performances and this year certainly had a bunch of them. Some were of characters teetering on the edge, others were restrained, one was scary in its immediacy, but the winner had every element I look for in a great performance. I raved about his performance in my review of the film, and he is most certainly worthy of taking home the Bloody Machete. I am speaking of none other than Emil Jannings portrayal of Mephisto in Faust – Eine Deutsche Volkssage.

This clip is long, and the music is different than in the version of the film I watched. For our purposes the music doesn’t matter, what matters is Emil Jannings and the awesomeness he brings to the table,

The best of the best, these films represent the cream of the crop from this years entries,

All five films that ended up being nominated were great cinematic experiences. I loved every one of the five nominees, and for the most part for very different reasons. That being the case, this was essentially a two horse race, coming down to either Peeping Tom or Faust – Eine Deutsche Volkssage. I was absolutely enthralled by both of those pictures and picking between the two of them (both of which happen to be in my top 100 of all time) was super difficult. However, there can only be one, and the one that is taking home the Bloody Machete is Faust – Eine Deutsche Volkssage. I’ve lauded a ton of superlatives upon F.W. Murnau’s terrific film, and guess what, it’s deserving of all of them. Faust – Eine Deutsche Volkssage was a great film to cap the Fest off, and it continues the German domination of this award, so yeah!

A bit out of context, but this clip below about the arrival of Mephisto to the human plane speaks volumes about how amazing the film is,

Another year of great horror is in the books, but the horror never stops for this bloke. I know I make a big deal about horror in October during the Splatter Time Fun Fest, but for me horror is a year round adventure. I had a blast with a great selection of films this year, hopefully you guys had a blast as well. I’ll be back next year with even more films, but until then keep watching those horror films, they need the love!