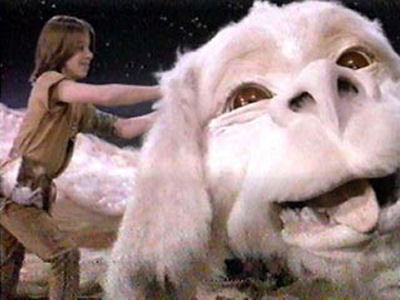 Is Falcor a dog or a dragon, my daughter says dog, and her word is final I think!

A beloved fairy tale, a divisive period piece, and Adam Sandler back when he was funny is the line-up card this week.

I was shocked to find that The NeverEnding Story that I had watched as a kid was actually Die Unendliche Geschichte. My discovery that the film was still shot in English with the only significant differences between the two versions being the score erred more o the funny side. My shock and laughter out of the way, Die Unendliche Geschichte pretty much held up to the bits and pieces I saw as a kid. I didn’t remember much of what I watched as a kid, but what I watched today rang true with the feelings I had stored in my memories about the movie. It’s a delightful fantasy tale, if a bit inconsistent and meandering in its story. It’s a wonderful movie to get lost in, but some of the film has, with age, grown a bit rough around the edges. Die Unendliche Geschichte is still a good movie, and that’s all it wants to be.

The title of Atonement is misleading as actual atonement never takes place. To the very end the character who needs to atone runs from actually atoning into a fantasy land where she imagines that she atones. Her death “bed” confession doesn’t help matters either, because at that point my inability to believe in her character had grown so much that the moment rang false. My main issue with Atonement was how overwrought it was. I understand that a lot of people will dig the machinations at play in Atonement, but the overwrought and over produced nature of the picture was not for me. When you add in another unconvincing performance from Keira Knightley you’re left with a picture that never felt true and thus I was unable to be invested in the proceedings. That’s a shame too, because visually Atonement is quite well done and it has one beach scene that is rather splendid.

It’s very, very stupid and infantile, with those two elements being the strengths and weaknesses of the film. Adam Sandler fans will, or at least I think they will, absolutely love Big Daddy as it is a kind of pure distillation of all the things Mr. Sandler finds funny. I don’t have the same funny bone Mr. Sandler does, and while I laughed I didn’t laugh enough for me to completely like this stupid comedy. A throw everything against the wall comedy where not everything sticks, but enough sticks for an occasional hearty laugh.

Only a trio of movies this week, and only one of them was actually what I would consider good. Die Unendliche Geschichte takes home movie of the week honors. Until next week, watch more movies!