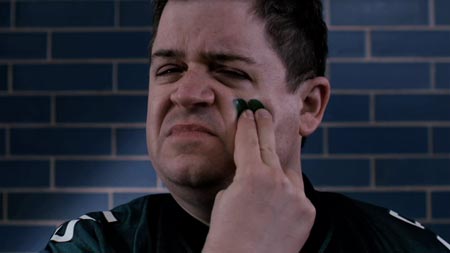 I like sports, thankfully I’m not the obsessively think about and call into sports talk radio type of sports fan!

Only a few movies this week, I told you my output would return to normal soon,

Underdevelopment holds back what was an otherwise well made and fun movie. The production value is on display in every shot, and the blue screen integration is handled well. Jaden Smith is charismatic in the lead role, Taraji P. Henson is funny and attention grabbing as his mother, while Jackie Chan is his usual cool self. That being said, the film takes shortcuts a lot and it shows in how underdeveloped all the characters are. With some more beef behind these characters The Karate Kid could have been a good film, as is it’s well made film that falls short of moving beyond just being well made.

I’ve been a fan of Patton Oswalt’s stand-up for years, and I’ve been a fan of his forays into the world of film and television. All the same, I never expected him capable of the torturous and pathetic, in a good way, performance he gave as Paul Aufiero in Big Fan. He is tremendous in this role, he doesn’t make Paul sympathetic, but he does make him a character that is easy to latch on to. I’ve known a few guys exactly like him, and watching Mr. Oswalt play out their lives just as I’ve known them to be was stupendous. The film on the whole is well written and directed in fine minimalist fashion, but the star is Patton Oswalt, and deservedly so.

Only three movies to choose from this week and it’s a no-contest. Big Fan really impressed me in just about every way, and it easily outshone the other two movies I watched. Movie of the week honors go to Big Fan. Until next week, watch more movies!