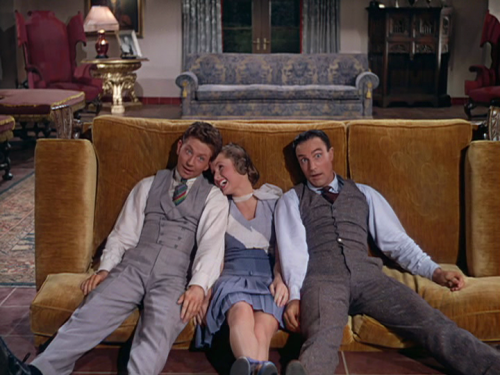 As close to the perfect musical as one can get methinks!

Of the many alluring qualities found in Singin’ In The Rain the two most alluring appear to be the least recognized. Don’t get me wrong, Debbie Reynolds is terrific and cute beyond words as Kathy Selden. Gene Kelly is a dancing and singing fool that is easy to get behind as Don Lockwood. Those two are definitely alluring and they are definitely two of the best qualities found in Singin’ In The Rain. The witty banter they display is fun to hear, and when they do sing and dance they bring an energy to the festivities that is infectious.

The production design is also positively alluring. The sets all look amazing, with the technicolor design looking even more impressive when it is contrasted by a pair of black and white film viewings. There’s one sequence where Don and the character of Cosmo Brown are walking through the various sets of Monumental Pictures. This could have been a throwaway sequence, instead it’s a sequence that is a lot of fun because of the great attention to detail seen in the background commotion of every set Don and Cosmo pass through. That is but one example of the amazing sets, truth to be told there isn’t an example of a less than finely detailed and well decorated set to be found in Singin’ In The Rain.

The music and dance numbers, well, the fine quality of those should really go without saying. But, I do like to hear myself talk, so I’ll say a few words about them. The key in my mind to the musical numbers in Singin’ In The Rain is how for the most part they feature intricate dance moves centered around simple lyrics and melodies. Take the title song for instance, it’s catchy, it’s lyrics are simple, and yet it speaks to the universal truth of love and that’s why the song aspect of the number sticks with me. The dancing part of the title song is easy to explain, it remains simple yet it’s also quite inventive. Gene Kelly throws himself around the set, sloshing in the rain like a crazy man. The physical energy he brings to that number, and all the rest, grabbed a hold of me and wouldn’t let go. It’s a hard feeling to describe, but watching Gene Kelly and company do their thing in Singin’ In The Rain is like being taken on the bubbliest and yet simplest ride in a theme park of awesomeness.

That leaves the two most alluring qualities of Singin’ In The Rain and the two that are possibly the most overlooked. Those two qualities would be none other than Donald O’Connor as Cosmo Brown and Jean Hagen as Lina Lamont. Both play what are essentially thankless roles, they exist to provide humor to the picture and to be the shadows of Gene Kelly and Debbie Reynolds respectively. Luckily neither performer is content with being a shadow and they combine to form the one-two punch that in my opinion helps elevate Singin’ In The Rain to classic status.

Mr. O’Connor is hilarious in every scene, mugging for the camera in the best possible way. He shines the most in his show stealing number Make em Laugh. The physicality he displays in that number is astounding. Mr. O’ Connor shows a total disregard for his body and he does so in the service of getting a laugh and entertaining. And boy does Cosmo ever entertain in that number and in every number he’s involved with. His dance moves no doubt require a lot of effort, but Mr. O’Connor makes said moves look like they are effortless. I highly enjoyed the character of Cosmo Brown, and if not for the performance of one shrill lady he would have stole every second of Singin’ In The Rain.

Said shrill lady is of course Jean Hagen as Lina Lamont. Her role is easily the most thankless, she plays the character so shrill that there’s no chance anyone could like her. Her performance, however, is easy to like, she throws herself into the role of a diva with no care for anyone but herself. Miss Hagan makes herself look the fool on more than one occasion and her willingness to be the fool is evidence of how great her performance is in Singin’ In The Rain. Miss Hagan is also given the difficult task of being the one main character who is never involved in any of the tremendous song and dance numbers. Yet she exists outside of those excellent numbers, carving her way through the film with her voice and her ability to always be the butt of the joke and yet still command attention on the screen.

The one sequence in Singin’ In The Rain that has always irked me is the Broadway Melody. Before I get into that it’s important to discuss the basic story of the film. It’s not complex or terribly innovative, but the story of the emergence of the talkie picture and how it changed the face of motion pictures forever is an interesting one. The story hits all the right beats and puts the characters in all the right places so that their actions carry just the right amount of weight. The story has a natural flow to it and all the songs help to build the momentum of the narrative, that is until Broadway Melody. Over repeat viewings I have mellowed somewhat in my dislike of Broadway Melody. I recognize how it ties into the changing times theme of the film. I also recognize the impressive production behind the number as well as the fabulous performances from all involved. That being said, I still feel that Broadway Melody is inserted into Singin’ In The Rain so that it functions like a damn holding up the flow of the narrative. Luckily Jean Hagen is quickly on screen after Broadway Melody to get the film back on track, but that does not change the “stopping the narrative dead in its tracks” feel that I still get from Broadway Melody.

Outside of that one sequence Singin’ In The Rain is a deserved classic. Even that one sequence is impressive in its production and the film does quickly recover from the derailment. The performances are all impressive, the film looks gorgeous and the song and dance numbers are infectious. Singin’ In The Rain is impressive all around, and it remains to this day one of the best musicals ever made, and it would easily be the best of all time if not for that darn Broadway Melody sequence.