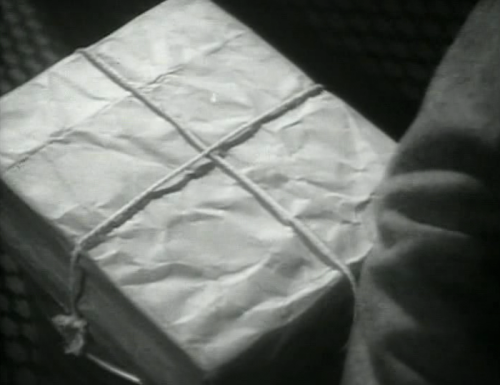 I’m nearing the end of this Alfred Hitchcock box set and the films have taken an upswing!

I like eating at burger joints. There’s just something about a good old fashioned cheeseburger smothered in ketchup with lightly salted fries on the side and a cold root beer that hits the spot for me. Remove any one element from that meal and I still enjoy my food from Tom & Jerry’s, the burger joint I sometimes haunt, but it feels wrong somehow. Something is missing from that meal, it just doesn’t set right in my stomach. I don’t become ill or anything of that sort. But, the complete meal I was expecting to enjoy leaves a sort of pang in my stomach. My usual solution to this is to grab something else to eat when I get home. I’m not sure why I do this, it never works out for the best. This always leads to an upset stomach because I’ve eaten too much and yet every time I forget the ketchup or don’t order the fries I end up eating too much of something else when I arrive home.

Sabotage is like eating a burger without fries and then gorging myself on sour cream & onion potato chips back at home. The tension and suspense of Sabotage is adequate but it’s not quite filling enough. Meanwhile the romance is too much, it doesn’t need to be there and it’s addition to the meal left me feeling bloated and sick to my stomach. Alfred Hitchcock had a perfectly fine movie on his hand about a dingy theater, an unsuspecting wife, a too friendly grocer and a shifty husband. When he tossed a little brother and a bomb into the mix his film had reached the point to where if those elements were cultivated Sabotage would have been a fine meal. Instead the stove grill is turned off before the suspense can fully cook and some unneeded and unearned romance is added as an afterthought.

The opening sequence of a blacked out London is impressive. So is the famous bus sequence, where Sir Hitchcock uses his edits judiciously to ratchet up the suspense. The acting by everyone involved is satisfactory, and the basic elements of the story don’t disappoint. There could have been more suspenseful sequences, and more devious chicanery from Oskar Homolka as Karl Verloc. For some reason those aspects of the story are left to simmer while the film shifts suddenly towards some sort of romance tale between the characters of Sylvia Verloc and Detective Sergeant Ted Spencer. Their romance is out of left field and it’s not earned for a second. The final sequence lacks the suspense that it should have had because of the focus on a romance between two characters that I had no reason to care about.

There are moments in Sabotage that are quite shocking, there’s a pair of key deaths in particular that threw me for a loop. But, when I was done with Sabotage I felt like I had just eaten a burger, drank my root beer and filled up on potato chips because Sir Hitchcock forgot to add fries to the meal. I liked the meal that Sabotage gave me to eat, but I didn’t need the snack afterward and I know that Sir Hitchcock could have prepared a more filling meal without having to resort to the potato chips.