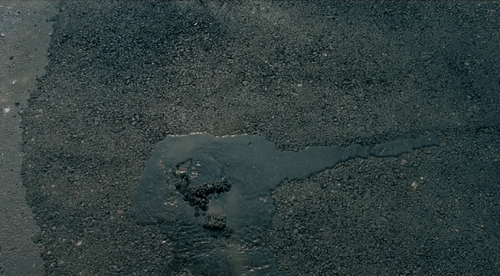 I’ll never be able to look at watermelon the same way again!

I had to think about Tian Bian Yi Duo Yun for a while before I was comfortable with what Ming-liang Tsai had done with his film. The tone of the film is equal parts absurdest comedy, romance, and cathartic release by way of dehumanizing actions. On paper those three approaches to a film don’t seem like they should mesh well. That’s why I had to spend some time thinking about Tian Bian Yi Duo Yun. I was impressed enough by the only other feature I have seen from Xiānshēng Tsai, Qing Shao Nian Nuo Zha (Rebels Of The Neon God) that I wasn’t willing to shuck Tian Bian Yi Duo Yun into the misogynistic porno bin. There’s a lot going on in Tian Bian Yi Duo Yun, and the longer I let it roll around in my head the more I liked what I had just seen.

I am quickly becoming enamored with the visual poetry of Xiānshēng Tsai. In Tian Bian Yi Duo Yun he carefully constructs every scene so that it is a natural visual progression from the scene before it. I was most impressed with how the climactic scene tied into the first scene in a visual sense and thus in a thematic sense as well. Languid isn’t a word that is always used as a positive. In the case of Tian Bian Yi Duo Yun I would use the word languid to describe the visual pacing of the film. I am most definitely using that term in a positive manner. Much like a painter, Xiānshēng Tsai takes his time to stroke his brush upon the canvas of the film. Tian Bian Yi Duo Yun is a meticulously constructed film, and that meticulousness pays off in spades.

Tian Bian Yi Duo Yun is not an easy film to watch and I can understand why a lot of people would be turned off by it, especially the final scene. My wife checked out during the first scene where Hsiao-Kang fingers a cut open watermelon that has been placed on a woman’s vagina. That’s an indication of the aggressive sexual content that is laced throughout Tian Bian Yi Duo Yun. While I do understand some people being turned off by said sexual aggressiveness I can’t say I had the same reaction. I went along with what Xiānshēng Tsai was trying to say, and I appreciated the craft he showed in tackling such difficult themes. Tian Bian Yi Duo Yun is a well acted and a well directed film that has me itching to check out more films from Ming-liang Tsai.