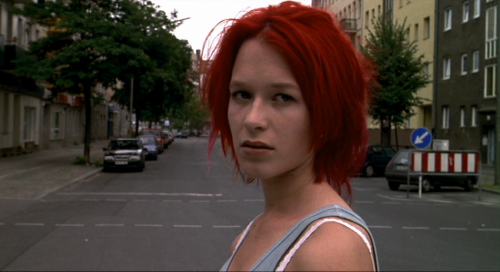 I used to run a lot, but never with so much energy!

I was searching for a way to describe Lola Rennt. Kinetic kept coming to mind, and certainly that does fit the energy behind the movie. However, when I walked out to the living room to write my review I saw my Wii and PS3 residing within my entertainment center and I knew what better described Lola Rennt. Video games have a lot in common with Lola Rennt, so much so that I would call Lola Rennt a video game come to life.

The film has an internalized reset button, and it has a constant motion to it that is very video game like. The style of Lola Rennt is the entire picture, a slapdash grab for money where the camera shows us so much so quickly that it’s hard to form a concrete picture of exactly where one is in the film at any given time. The exception would be the few moments when Lola stops running, but those fit the video game aesthetic because they represent the equivalent of cut scenes. The film inserts stops in the action that are brief and merely help to propel the films heroine into even more action.

There is a definite lack of story (I know that many video games have great stories, but the lack of story in Lola Rennt is very similar to the lack of story found in certain action video games) in Lola Rennt. While I appreciated how the lack of story and character depth tied into the video game connection it did stop me from becoming fully enveloped in the proceedings. I’m not necessarily a story guy, but I did feel that Lola Rennt needed more story, or at the very least more meat to the story it was presenting. If the ultimate driving force of the film wasn’t Lola’s love for Manni the all style approach would have worked more for me. However Lola’s love for Manni is never fleshed out enough to believably drive the story like it does.

All things considered, I had a lot of fun with Lola Rennt. Tom Tykwer’s film is very energetic and it’s sense of space and the usage of said space was impressive. I liked how the film played with the idea of consequence and the small elements that influence the consequences of our actions. I would have liked the story to have more heft and the characters to be more real. But, I’m aware of the video game aesthetic of the film and that the video game style Herr Tykwer employed worked for the most part. Lola Rennt is a high energy trek through a manic world that is more pixel than film. The run isn’t always smooth, but the way Herr Tykwer pounds the pavement with style makes up for the films narrative shortcomings.

Lola Rennt was a movie that intrigued me so much when I first saw it. I went to a rerun film festival with a few friends from school to see this foreign movie that none of us had ever even heard of before. I really enjoyed the movie, but even more I think I enjoyed the experience. I realize now, especially after being married to Bill and being exposed to numerous “different” foreign films, that Lola Rennt is actually not all that different or strange. But at the time I had never seen anything like it at all. I think it was that rare feeling of seeing something so new to me that made it stick so much in my memory as a pleasurable experience.

To be honest the characters are not ones that I found very likable throughout the movie. Yet, for some reason I very much cared about their plight. I can’t pinpoint the exact reason, but somehow the film made me interested in the success of these characters even though they weren’t people I very much cared for. I remember when I saw the first time Lola stops and reverses time and I was incredibly interested after that in seeing how she could make things different or better. I also found myself being so intrigued in the different outcomes of the non-named characters that Lola somehow interacts with on her various trips through her adventures.

The movie was not only different or odd to me, but it was also interesting. The movie was fast paced and used film techniques that I was not familiar with. None of the films I had watched up to the point I watched the movie for the first time had ever used any techniques like those found in Lola Rennt. These interesting effects are what helped keep me engaged in the movie despite the repeating nature of the story. Lola Rennt never stopped being interesting to watch, and it remains a movie that I enjoy watching. The experience of watching Lola repeat her trek over and over again never gets old and Lola Rennt felt just as fresh this time as it did the first time around.