Postulating & Pontificating: Why Originality Is Overrated! 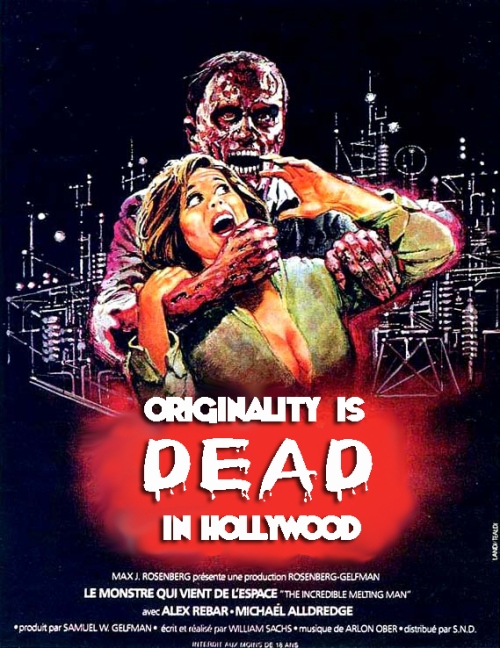 In recent years there have been countless cries against the lack of originality to be found in Hollywood. There have been books, critical essays, blog posts, and podcasts dedicated to the idea of the lack of originality in Hollywood. I’m not sure of the exact date of when people became convinced that Hollywood was ever original. What I do know is that my short term memory is clogged with people citing Hollywood as a place with a lack of imagination. To be honest the argument against originality has reached a point of over-saturation. When Mark Wahlberg stops by The Film Programme to complain about the lack of new ideas in Hollywood while promoting his new movie that just so happens to be a remake of a foreign film I think we’ve gone too far. Do you see how bad it has gotten? I’m being forced to create run-on sentences because the originality is dead in Hollywood argument has gotten so out of hand.

I think it’s important for people who claim that present day Hollywood suffers from a lack of originality to take a step back and reevaluate their position. Hollywood has never been original, nor does it need to be original. There are original ideas and original films that do come out of Hollywood. There always have been and there always will be. But, Hollywood has been littered with remakes, sequels, and adaptations of every source material imaginable since it came into existence. Why so many decide to ignore this I do not know, but they either ignore Hollywood’s unoriginal past completely or try to somehow justify away a history of remakes and sequels. Let’s stop for a second and take a look at a certain year in Hollywood,

We’ve moved ahead in time now, from one iconic era to another. Yet the results are the same, not a single one of the films listed are original. Despite so many people claiming that Hollywood was once original and now does nothing but produce remakes, sequels, prequels, and adaptations the 45th Academy Awards from 1973 did not feature a drop of originality in the best picture category. Utvandrarna, Sounder, The Godfather, and Deliverance were all adaptations of novels. Cabaret is an adaptation of a play that was in turn an adaptation of a novel, a play, and another film. Maybe it’s just the Academy Awards that are the problem, here’s a different list,

All-Time
Citizen Kane
Vertigo
The Searchers
Singin’ In The Rain
Sunrise: A Song Of Two Humans

That list is taken from They Shoot Pictures Don’t They?’s annual The 1,000 Greatest Films. Excluding the previously mentioned The Godfather, these are the five highest ranked Hollywood productions on the list. The Searchers and Vertigo are based on novels, while Sunrise: A Song Of Two Humans is based on a short story. Singin’ In The Rain was built around an old song, and Citizen Kane is based on the life story of William Randolph Hearst. I can see how the last two are dodgy, and that’s why I’m not going to count them as unoriginal. However, even if I do count Singin’ In The Rain and Citizen Kane as original that leaves three that were adapted in some way.

I could continue to list movies, but I believe the films I have provided proclaim my point loudly enough. I’ve had it with the argument that Hollywood is no longer original. Making that argument is ignorant, the history of Hollywood speaks for itself. I’m big on the subjectivity of film, but in this case there are objective facts at play. There have been unoriginal works throughout the history of Hollywood, it’s time for people to get over the notion that remakes and adaptations are some new trend. Some of the very best films of all time, no matter what list you want to consider, are remakes, sequels, and adaptations of other source material. The next time you feel like you want to deride the unoriginality of Hollywood today try and think of the past. Ask yourself the more important question, is the film any good? Originality has nothing to do with the quality of a film, unless you’re about to tell me that On The Waterfront isn’t a great movie simply because it isn’t original? Hollywood is just as original today as it was in 1932 or 1975, and that’s not too darn original.

4 responses to “Postulating & Pontificating: Why Originality Is Overrated!”