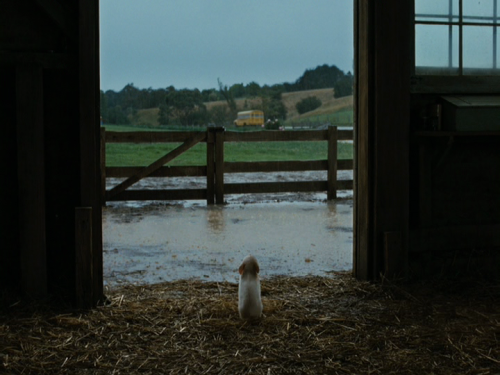 Yet another marathon comes to a close, this time with more talking pig action!

I appear to be a sucker for stories with talking pigs. Truth be told in the large number of talking animal films that are out there the ones with talking pigs as the lead seem to be able to achieve a tone that the others do not. Charlotte’s Web is no Babe, or Babe: Pig In The City, but it is a great movie in it’s own right. Wilbur, nor any of the other characters in Charlotte’s Web manage to be as striking and as enrapturing as the eponymous Babe. That being said, Charlotte’s Web does share the quality with Babe that it is a very gentle film, and the better for it.

There are a few stumbles in Charlotte’s Web, such as a moment when Wilbur does a back-flip or the two instances of flatulence based humor. However, those are the only attention grabbing moments in Charlotte’s Web, the only instances when Gary Winick’s film strives to be a movie it most certainly is not. The rest of the time Charlotte’s Web is content with being a simply told and simply paced film. There’s no rush to the proceedings nor is there a great desire to use ADD inspired techniques to harass the audience. The classic story unfolds at a leisurely pace where the simple pleasures of friendship and a job well done are the order of the day.

To go along with gentle, the other word that springs to mind after watching Charlotte’s Web is genteel. The lack of flashy tricks and the reliance on a good story cause Charlotte’s Web to have an earned refinement. The final moments of the film could have been all too precious, but the preceding minutes of the film earn such an ending. The emotions that the finale of the film seeks are felt all too easily because of how willing the film was to work to earn said emotion. I’m all for rewarding a film that is willing to put in the hard work to earn it’s piece of sentimental pie.

Charlotte’s Web is a pleasant film, one that will bring a smile to the face of both adult and child alike. In a day and age when good family films are harder and harder to come by (of course that could just be me making a terrible generalization) Charlotte’s Web is such a film. Neither flashy or showy, Charlotte’s Web chooses solid storytelling and well earned affectations instead. It isn’t perfect, but what warts there are seem to be right at home alongside a genteel pig and a barn full of stinky, but friendly, animals.