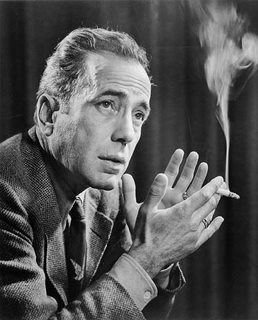 When acting meant being a bad ass in a fedora!

Opening joke aside, I’ve been thinking of doing random lists like this for a while now. I picked the 1940s through a complicated eenie meenie miny moe system. I decided to do male actors first because, well, I’m a guy. There were a lot of great performances in this decade. A lot that I begrudgingly left off the list, and a lot that I still have to discover. Here’s my current top five male performances of the 1940s, with a few words and a small clip,

What most people overlook or forget when discussing It’s A Wonderful Life is the darkness of the film. Key to that darkness is Mr. Apple Pie himself, James Stewart, losing his marbles, berating his family, and contemplating suicide. Throughout the film Mr. Stewart plays George Bailey as a resolute rock, the man who can take on the burden placed upon his shoulders. Then the levee breaks and the heavy burden placed upon George’s shoulders is shown to be far too much. When that happens there’s a level of despair in James Stewart’s eyes that scared the bejeezus out of me. His world is lost, he is a failure and while he outwardly lashes out he blames himself on the inside. Mr. Stewart plays those moments enraged, and imbues George with so much self-hatred that it makes the viewer feel equal parts pity and fear.

Known affectionately by film fans everywhere as Bogey, the world weary bar owner isn’t all surface but I’ll be damned if that surface isn’t fascinating. There is a lot of hurt and emotional complexity in the performance of Humphrey Bogart as Rick. At the same time the surface is flooded with a mass amount of detached cool. Maybe I’m wrong, but I feel that male actors the world over have spent the years following Casablanca trying to recapture the aloof coolness of Rick Blaine. When he inhales a cigarette it makes smoking seem like the coolest thing ever, even if I do know that smoking is as far as one can get from cool. When he deals with Ilsa we get to see how damaged Rick truly is. Mr. Bogart never relents in his smoldering performance, and men have been trying to be him ever since.

He may only be a supporting player, but Orson Welles steals the show in The Third Man. I know a lot of people have written about his iconic performance in Carol Reed’s film. I don’t have anything new to add, but all the same it is a performance I fell instantly in love with. That love affair has never ended, and I still turn to Mr. Welles’ work in this film when I’m looking for a jolt of acting energy. He doesn’t play the part over the top, but Mr. Welles charges through the bombed out streets of Vienna like a man who is going to explode from internal combustion. Every word he says is of great import, and every movement he makes seems like it is a moment to remember. There’s an amount of self-awareness to Mr. Welles’ performance as Harry Lime, so much so that it’s almost as if he is playing himself. Throw all of that together and you have what may be the greatest supporting performance of all time.

Speaking of energy, no actor better personified energy than James Cagney. He fires off his dialogue in White Heat like his lips are a machine gun and his tongue is the trigger. He clearly has mommy issues, and people issues in general. He’s a damaged individual, and he’s as dangerous as they come. Mr. Cagney is a fireplug of a man, a gangster who will do anything to survive. The title of the film could refer to the heat that Mr. Cagney generates with his performance. Cody will bring about his own downfall, Mr. Cagney leaves no doubt about that because of the intensity with which he plays the character. There have been a lot of great gangster performances through the years, but the intensity Mr. Cagney brings to Cody Jarrett remains unmatched.

I’ve never seen Ray Milland in another movie, at least not in as important of a role. I’m not sure if I need to see Mr. Milland in another movie. His portrait of an alcoholic is tragic, upsetting, desperate, and it makes me angry. The good guy that Don Birnam could be is always present, it’s never more clear than in the people who are willing to be there for him as he messes up his life. Mr. Milland affects charm in his performance, but he also presents a harsh and brutal reality. His charm is enough to distract the viewer, but his actions are able to bring the harshness of who he really is back into focus. There’s a resignation to the character of Don Birnam, he knows who he is and he knows he will always be that man. Mr. Milland doesn’t play up his characters sympathetic traits. Instead he plays Don Birnam honestly, and this elicits fear, sympathy, and anger from the viewer in a natural fashion. There’s no chance Ray Milland was ever this good again or before, but he didn’t need to be, Don Birnam is one of the all time great performances.