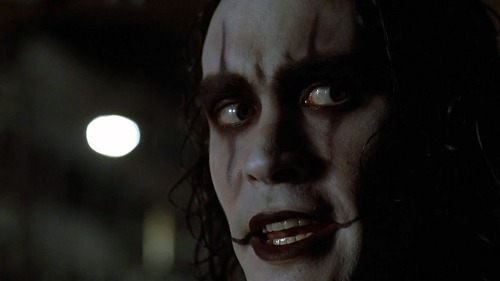 Funnily enough, Bill the comic book geek has never read any of The Crow comic iterations, and I get the feeling I’m not missing out on a whole lot!

Another week with a decent number of movies,

As a continuation of the franchise Ice Age: The Meltdown is a perfectly adequate movie. It doesn’t bring anything new to the table, it doesn’t risk anything, but it’s funny in patches and is decently animated throughout. I know that reads as halfhearted praise, and I suppose it kind of is. But, the truth of the matter is that Ice Age: The Meltdown is a well made film that is nothing more than adequate entertainment. I laughed some, I rolled my eyes some, I liked some of the animation, and I moved on as soon as the movie was over.

I suppose the concept behind this Scrat short should be funny. I probably should have been laughing, but I ended up finding No Time For Nuts a waste of time. The animation is okay, and Scrat is after that nut just like he always is. But, the time jumping and the references to history and pop culture was too much like Shrek for my liking. I laughed a couple of times, so I guess there is that. But, I didn’t exactly like what I was watching and that trumps all.

Little Big Men is one of those films that has an interesting topic buried deep within too much set-up and a lot of padding. Their are undue expectations placed upon elite child athletes, and Little Big Men wants to get to the heart of that but it takes it until there are only twenty minutes left in the film to finally get to its main point. Those twenty minutes are far better than the rest of the film, and even if the rest of the film isn’t necessarily bad that’s not a good thing. Little Big Men needed to get to its point sooner and it needed to explore its excellent point more thoroughly.

Lately I’ve been watching more and more documentaries, I’ve seen some great documentaries that have helped to change my less than kind opinion of documentaries. Marion Jones: Press Pause is the type of documentary that works against all the documentaries that have been changing my opinion. This is a documentary that doesn’t seek to shed any light, or bring any truths to the forefront. Marion Jones: Press Pause is nothing more than a fluff piece where the director, John Singleton, is a fan of his subject and goes out of his way to present her in a positive light. Worst of all is Miss Jones herself, who throughout the documentary continually blames others for her doping and steroid use. She admits she was wrong for lying to a federal grand jury, but not once does she admit that she was wrong in doping or that she was ashamed of her actions in doping. Mr. Singleton rolls with this and presents Miss Jones as some sort of hero, and he does so using a banal style. Instead of an interesting documentary, I felt like I was watching a high school news piece about a local hero who can do no wrong and that’s not what I should have been watching.

The first hour of The Crow is an interesting concoction of rough elements. Everything about the first hour of Alex Proyas’ film is rough around the edges and a tad off. Yet it all fits, and I don’t have an actual reason for why that is the case. Brandon Lee’s performance is a great example of how the roughness of The Crow just feels right. He has charisma, and the camera is certainly drawn to his actions. But, he’s not his father, Bruce Lee, in any way. His movements are somewhat clumsy and his fighting is not aesthetically pleasing. I have no doubt that Brandon Lee was a much more fluid fighter and individual than what we got to see in The Crow. But, the roughness of his actions, his fighting, and his acting meshes perfectly with the appealing roughness of the rest of the film. The finale of the film is too standard of a shoot everything you see chaotic action ending. It is not the way to end a movie as introspective and calmly raging as The Crow. But that’s the ending the film has, and that’s why The Crow is not a great film.

Nothing truly great this week. But, while Ice Age: The Meltdown was simply fun, The Crow was a well made film that took some interesting avenues. The Crow takes home movie of the week honors. Until next week, watch more movies!