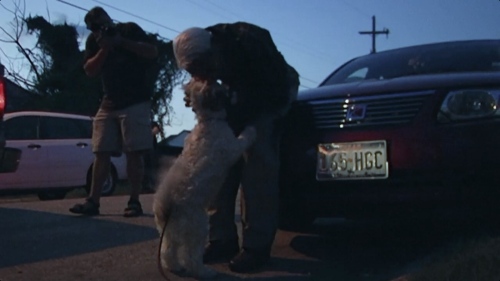 Sometimes I watch a movie just to watch it, and other times I decide beforehand that a particular movie will be getting the full review treatment. Don’t mistake my words, I tend to review pretty much every movie I watch, but due to time constraints most of the films I watch nowadays are for my This Week In Cinema feature. Those aren’t lesser movies by any means, it’s simply a case of my busy schedule necessitating the bite size reviews as opposed to the full length ones. But, every once in a while I watch a movie and it strikes me so much that I have to write a full length review. I had no intentions of devoting a full length review to Mine, but as the movie progressed I knew I was hooked and I knew that I needed more time to let people know about this wonderful documentary.

The topic that Mine tackles isn’t an easy one by any stretch. By focusing on the greatest natural disaster that the United States of America has had to deal with in a long, long time the film is already on interesting ground. Where Mine changes things up is by focusing on a specific issue within the much broader scope of Hurricane Katrina. There are brief flashes of the totality of the devastation and damage wrought by Hurricane Katrina. Mine uses those flashes to springboard into the specific issue of pets that were left behind during the evacuation of New Orleans during the hurricane.

As an aside, I think it’s important to use the term left behind as opposed to abandoned. I’m sure that some pet owners did abandon their animals, but a lot were forced to leave their animals behind through no choice of their own or through extraordinary circumstances. It’s important to afford those pet owners the decency of a simple change of phrase, they deserve at least that much.

The film itself is the opposite of a hurricane. It isn’t volatile, nor does it seek to sweep over the issue and make big splashy dents in the landscape. The tactic taken by Geralyn Pezanoski is to present a documentary that is at all times restrained and bereft of hyperbole. This is important because it lends gravitas to every situation the film puts us in and to every person the film wants us to spend time with. Mine is more like a gently rolling river, dolling out information and receding back and forth as it presents all the various sides of the places that the documentary ends up going to. This isn’t a galvanizing film, it is an enlightening film seeking to bring to the forefront an issue that is certainly fascinating.

When it gets to the issue of pet ownership in the wake of Hurricane Katrina Mine walks a very dangerous line. If the film leans too much in one direction then it will lose some of its credibility and the agency it has gained with its audience. Luckily Miss Pezanoski looks at both sides of the issue of pet ownership. I took a side, I will not deny that fact. I believe that with due diligence the displaced pets should have been returned to their displaced owners if they were actively seeking out the return of their companions. What impressed me about Mine was that it did not join me in taking a side. It found footholds to dig into on both sides of the ownership debate. By doing so it not only continued to build emotional investment, it also maintained its credibility as a documentary.

I have in the past been very critical of documentaries, so much so that I would often dismiss them wholesale. Thanks to documentaries like Mine I am no longer the sole member of the anti-documentary troupe. Documentaries can be moving, tense, and full of just as much drama as the best fictional movies. Mine weaves a fine tapestry of emotion, information, and truth. It does at times skid into the realm of manufacturing moments, but thankfully there aren’t too many moments straight off the documentary assembly line. As it stands Mine is a powerful documentary that seeks to shed light on an issue while not losing any of its smart cinematic appeal. I didn’t expect to get as much out of Mine as I did, but I’m happy that I got more than I bargained for. I have no problem telling everyone that Mine is an under-seen documentary that everyone needs to take the time to see.