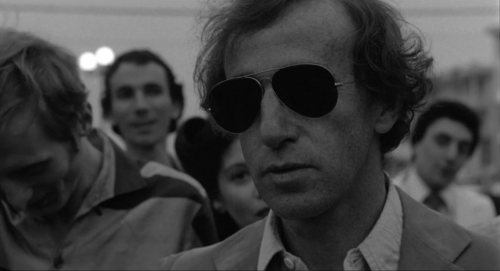 Oh, the joys of false memories and regret begat by the future!

The opening four or so minutes of Stardust Memories are telling of why the film worked so well for me. In that small stretch Woody Allen manages to comment on the allure of youth, how afraid he is of being old, and how he can’t handle the idea of producing works that people, including himself, consider trash. The remaining hour and twenty minutes of the film serves as a support mechanism for those opening four minutes. Mr. Allen uses his usual neurotic approach to examine where he falls in the world. But, he moves beyond himself and tackles some questions that matter to people beyond just Mr. Allen.

One such question is answered in the final five minutes of the film. Now, when I say answered I don’t mean that the film actually provides an answer to any question. Nope, Stardust Memories lays out questions and leaves it up to the viewer to form their own answer. The question that had the most impact on me was that of simple happiness versus a recognized life. Mr. Allen’s character is striving for a life of recognition, a life where his actions matter. In doing so he has moved past the simple things in life and forgot the joys that come from simple endeavors. In a late scene Sandy Bates, Mr. Allen’s character, reminisces about a moment of pure bliss with an old girlfriend. That moment was extremely important to me because it emphasized the melding of profound and simple. Sandy wasn’t going to be happy in life until he managed to be happy as well as seek recognition.

The above interpretation is where I differed most from the other reviews I perused. The opinion most spoken of by the critics was that Mr. Allen had made a messy film full of too many characters that was self-nihilistic to the extreme. That is certainly a valid interpretation, but I feel that the final moments of the film work against such an interpretation. Mr. Allen wants to be happy, he may question his role in the world but that only leads to him understanding how important simple happiness is alongside recognition. Mr. Allen isn’t being self-nihilistic in Stardust Memories, if anything he is praising his life and his accomplishments. He questions what he has done with his life and he winds up being happy with the balance he has found.

There is a healthy dose of comedy to be found in Stardust Memories. There’s also beautiful black and white cinematography from Gordon Willis, and fine acting from all involved. The philosophical aims of the film would be for naught without such splendid technical elements. I had a blast watching Stardust Memories, I laughed just as much as I ended up deep in thought. Maybe I’m just a sucker for the type of films that Mr. Allen likes to make. But, I’d like to think that in Stardust Memories Mr. Allen has made a profound movie about life, love, old age, and happiness. In other words you can go ahead and add Stardust Memories to the long list of fine films directed by Mr. Allen.