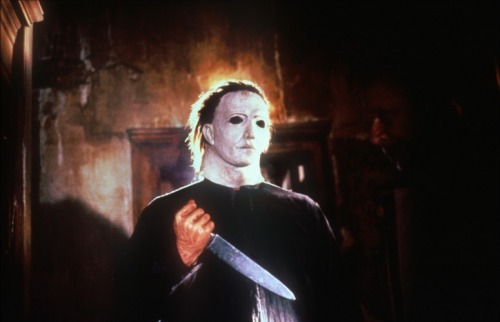 If Michael Myers were my uncle, I think I’d change my name and leave the country, or at the very least get an Order of Protection!

It’s a slasher bonanza this week,

Hirokazu Koreeda inserts sequences in Dare Mo Shiranai where the children the story is focusing on are naturally at play. In one sequence they frolic through a park scrounging up dirt to plant some seeds they had earlier acquired. In another sequence the elder child, Akira, is chosen to play in a baseball game and as he plays it is easy to spot the childish happiness that he gets from simply playing a game. Those moments are key in Dare Mo Shiranai, because they help to make the dramatic moments all the more dramatic. Koreeda-san’s film moves at a languid pace, taking it’s time to set up the children and show their plight in a more natural manner. By the time the film ends it’s clear that these children have been stripped of their childhood and that adults have chosen to turn a blind eye. Dare Mo Shiranai is damning, but it does so without pointing any fingers but rather by letting the camera showcase the events that transpire. Dare Mo Shiranai is the first film I’ve seen from Hirokazu Koreeda, but I eagerly anticipate discovering more of his work.

Der Baader Meinhof Komplex is far too on board with its protagonists, and far too willing to revel in their supposed coolness. Uli Edel and company completely ignore the consequences of the actions of the Red Army Faction, and up until the final two minutes clearly takes sides and put them up as the heroes and martyrs of the events that transpired in the 1960s and 1970s. The period recreation is great, with the locations and costumes being of the most sterling quality. Unfortunately, I couldn’t get past how cavalier the film was with the actions of the RAF and how it hoped that a change of face in the final two minutes would somehow erase how in love the film was with its “cool” characters for the first two hours and twenty minutes. Der Baader Meinhof Komplex is not a terribly made film, but it’s a misguided attempt at applying martyrdom to a group that is most certainly not worthy of martyrdom.

The series returns to form with a really engaging and smart, back to basics slasher film. All the elements are in place for a traditional slasher, and in a lot of ways Halloween 5 is a traditional slasher. However, as the film progresses it swerves in a few places so that it becomes more than just a traditional slasher. All the kills are cool looking, but they aren’t of the sort where whimpering high school kids flee and are struck down by the slow moving killer. If Michael Myers doesn’t surprise his victims in Halloween 5, then every single one of them fights back and actually stands up for themselves. They don’t cower in the corner, and there’s even a few instances where a character will take on Michael to save another character. The story is an interesting one, putting forth more of a supernatural idea, where Michael is now joined on some level with his niece, Jamie Lloyd. This creates for more than just his usual stalking, and it creates tension in the role that Jamie plays in the film. Donald Pleasance is batshit over the top, but in the best of ways. Danielle Harris may be nine, but she gives a really great scream queen who can’t really scream performance. The ending is a bit of a letdown, and it’s by no means a perfect film, but Halloween 5 is one of the best slashers of the 1980s, and maybe even of all time.

Halloween 4: The Return Of Michael Myers was not a good entry in the franchise, but Halloween: The Curse Of Michael Myers is the first downright terrible Halloween film. The kills are, for the most part, generic. The characters don’t matter, and the way that the memorable franchise characters are used pretty much shits all over the mythos of the franchise. The story contradicts itself at every turn, and offers no reason to care about Michael Myers, the stupid cult, or any of the characters that appear in the film. The score is dreadful, offering up some sort of grunge and electronica influenced remix of John Carpenter’s classic theme. In every way that matters Halloween: The Curse Of Michael Myers is a tired and worthless mid-1990s slasher.

It will probably surprise some of the more serious cinephiles who read my blog, but Dare Mo Shiranai is just edged out by Halloween 5 for movie of the week honors. What can I say, I’m a sucker for a great slasher, and that’s Halloween 5 in a nutshell. Until next week, watch more movies!