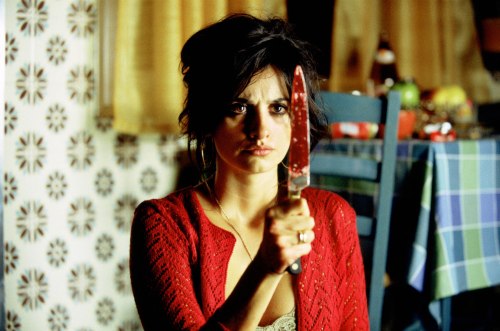 As if I needed further proof that I don’t understand the female mind!

I could not get into this. It was far too slow and it didn’t really build to any of the suspense. It was like, “Hey, here’s some suspense, now feel all suspenseful and stuff, c’mon, feel it!” I didn’t believe the romance between Ingrid Bergman and Carey Grant, and as someone else pointed out, Frau Bergman agrees to marry and sleep with the enemy to help the government because she believes it’s what her beau wants her to do. He then proceeds to treat her like crap for it. It’s very hard to view him as some sort of savior at the end after what he made her go through. It had its moments, and there were times where I enjoyed the dialogue (although I did find it far too witty for its own good) and I rather enjoyed Frau Bergman’s performance. Easily the worst Alfred Hitchcock I have seen.

Completely excessive, stupid and downright ludicrous for the most part. It’s a movie that takes itself far too seriously, full of people that aren’t causing me to take them seriously with their ridiculous accents and over the top performances. It’s bloated, so bloated in fact that after about forty five minutes I wondered if it was ever going to get to the point or if it was going to be two more hours of Brian De Palma night club crane shots. I think most of all it was the fact that I didn’t care that got to me. The narrative gave me no reason to care about what happened to any character in the film, outside of maybe Manny. So yeah, completely bloated, and if people actually think this is great outside of the Dipset crowd, completely overrated.

I greatly enjoyed this. There were moments where I thought it tried to get a little too meta and was a bit too character heavy, but even an excess of characters wasn’t a big knock against the film. It looked beautiful, was shot beautifully, and featured some bravo acting. It actually made me think of Penélope Cruz as a good actress, something I didn’t do before and haven’t done since. Worth the watch.

Rain Man is a movie that could be endlessly sappy, it could provide the happiest of endings and it could provide a miracle cure,. Thankfully, it doesn’t. Rain Man ends the only way that it can end, with one man changing and the other staying the same. It ends with the brothers separated and with no cure for Raymond to be found. That and the journey of Tom Cruise’s Charlie are the strengths of Rain Man. The rest of the movie is honestly very cliche and very formulaic, but that’s actually okay because it serves as the impetus for that ending and for Charlie to change.

There are two key scenes in Rain Man, bookmarks of the movie. In the beginning Charlie is overseeing the offloading of expensive cars, but he can’t stay still, he has to move about and he has to make sure he maintains control over all he sees. This is where Raymond comes into play and the effect he has on Charlie is seen in the final moment of the movie. Charlie calls back to Raymond, and at that moments he realizes all he can do is tell Raymond goodbye and let him go because he doesn’t have control over all he sees. So, he tells Raymond goodbye and stands there leisurely watching the train depart. The Charlie at the beginning of the movie would never have been able to do this, but the Charlie that has met Raymond and been affected by him can now partake in such actions.

I’ve said it before and I’ll say it again, Tom Cruise is a very good actor that gets a whole lot of flack for reasons I’ll never understand. Sure, he’s an overbearing pompous jerk in real life, but that has nothing to do with what he does on the screen. He is an actor that as his career progressed was willing to take on many different roles and play them all quite differently showing great range in the process. I’ve always been a fan, and Rain Man was the first film of his that I saw where I envisioned him as more than just an action hero/heartthrob. His performance was the performance of the movie, surprisingly enough. Dustin Hoffman was good, but his role was rather simplistic and straight forward. There wasn’t anything hidden behind his eyes or in his soul because Raymond was on display for all to see. Mr. Cruise had to be deep and nuanced in his role, he had to bring the humanity to the part to make you believe that he could be affected by his brother and that his brother could change him.

Not a greatest type movie, but a great movie nonetheless, and a movie that is often overlooked from its era. I understand that’s due mostly to the stock nature of the underlying story, but the meat and potatoes of Rain Man is the change in Charlie and the fact that Raymond won’t change and that dynamic is enough to make this movie one worth seeing.

No blog review, I don’t review movies I see in theaters anymore, It was decent bordering on good.

A so so week for retro movies. Two pretty strong entries made up for the other, weaker entries. Volver takes home retro movie of the week honors. I’ll be back next week with five more retro capsule reviews!