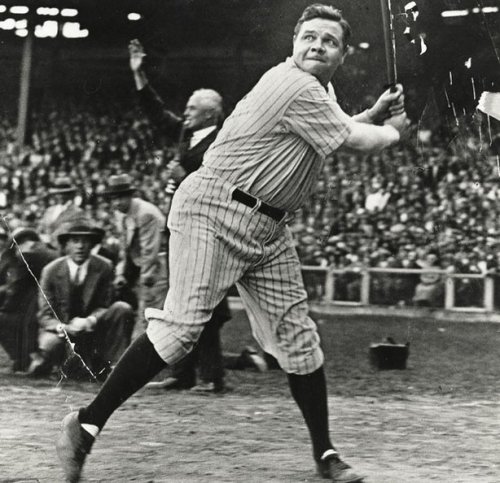 There’s a certain sport that is my favorite of all time, I wonder if anyone can guess which one?

After a bit of a drought I got in a lot of movies this week,

A loving, information laden, and well crafted tribute to the sport I love most of all. That right there should tell you why I love Baseball as much as I do. The approach taken by Ken Burns is what makes the subject matter shine so much. I’ve seen the footage used in the documentary in countless news and sports media reports. But, the way that Mr. Burns uses the footage and the information is to present an overview of the historic sport. He gets into the little details that make the sport so great, and he uses his talking heads wisely. They add to the the discussion instead of drawing attention away from the discussion. The last part of the documentary shows some signs of what will plague the follow-up, but still, a great film.

There was something missing with Argo. I had a hard time putting my finger on what exactly was missing, but I never fell in love with the film in the way one should with a great film. The more I thought about Argo the more I realized my problems with the film were in the drama being held up by shallow characters. Ben Affleck, and the screenplay, never let us get to know a lot about the characters in his film. Had Argo played more as an action piece that wouldn’t have been a big problem. But, as a dramatic film the lack of depth to every character makes the dramatic moments weaker that they ought to be. The dramatic moments still work, and when I was finished watching Argo I was satisfied with what I had been given. But, satisfied isn’t great, and Argo is far from great.

I enjoyed this continuation of Baseball, but I didn’t love it. The framing that was so successful in the original is still present, but it’s hampered by the bias this inning holds so tightly to its chest. I get it, the East Coast is important, but it’s not so important that in a four hour stretch three hours need to be devoted to the East Coast and the other hour be devoted to steroid use. The steroid issue is important, and I was glad that Baseball: The Tenth Inning delved into the steroid era in the way that it did. At the same time, I wanted the film to give a fair shake to the St. Louis Cardinals, the Atlanta Braves, the Florida Marlins, the Anaheim Angels, and so forth. Instead, it focused almost exclusively on the East Coast teams and that bias really hurt my interest in what the film had to say.

All these years later and I finally get around to the cult classic. I have to say, I wasn’t impressed. Call me a fuddy duddy if you want, but I didn’t find the film funny, or shocking, or energetic fun. A few of the songs were catchy, but on the whole it was a series of disconnected songs (with the only thread tying the film together being that of the overt and sloppy straight versus homosexual angle) and scenes that didn’t add up to anything. The theater revivals can continue, but I’ll gladly skip them all because The Rocky Horror Picture Show doesn’t have enough of anything to pique my interest a second time.

A photo-realistic approach gives way to romantic drama. The animation is lovely, finely detailed, and gorgeous to drop your jaw at. Yet, the true allure of this Pixar short is in the way that Saschka Unseld takes inanimate objects and infuses them with just the right amount of life. They are still functional as items, but they are personified with human like qualities. They are meant to mirror their owners, at least that’s what I took from the short. At the same time the umbrellas are the essential elements of a tried and true love story. When beautiful animation and a beautiful love story combine, well, you have a short that is simply beautiful.

A prequel that perhaps did not need to exist, but if it’s a great film then does that facet of the film matter? My answer is no, all that matters is that Monsters University is in and of itself a great film. It is funny throughout, and the animation is of the usual top quality that I’ve come to expect from Pixar. What most impressed me about Monsters University was how the story took some interesting turns near its end. The one major issue I had with the film was cleared up in the final twenty minutes when it threw a wrench into the works and moved beyond being a rote “lame guys on campus overcome all” story. Most of all, and this may not be a critique that some agree with, but I enjoyed spending time with the characters from Monsters, Inc. and when you add up all the parts of Monsters University I enjoyed myself period. And that’s the point of going to the movies, no?

This will be a polarizing film, I have no doubt. I’m filled with the same lack of doubt when it comes to Man Of Steel being a great film. This is a great film, not just a great action film. Yes, the action is great and delivers in the way that Zack Snyder is usually able to deliver when it comes to action. However, the real strength of Man Of Steel is in its thematic depth. Man Of Steel is a film about choices, and it is broken up into a narrative where every section is about a choice. Characters make choices that define them and everyone around them and they frame the world through their choices. Some become villains because of their choices, but they never become evil. Others become heroes, but they never become the classically perfect hero. Man Of Steel is a great movie because of a well written screenplay from David S. Goyer, and the terrific framing direction of Mr. Snyder. It’s no Superman Returns as far as being the best of the franchise goes, but it’s a great film that resides near the top of the superhero film mountain.

It holds up, even if some of the cracks are now obvious. The special effects are a bit dodgy, and there’s really not much of a story to mull over. Still, Honey, I Shrunk The Kids is a charming fantasy/science fiction tale that is funny when it needs to be and fantastical in a very intriguing way. Some of Joe Johnston shines through, such as the way he uses baseball to move the story along and be the savior of an American story. But, this is an assembly line production, it works just fine, but it’s not outstanding or memorable outside of nostalgia reasons.

A handful of really great movies this week, but one shined more than the rest. It may have lost me a bit near the end as it took a biased turn, but Baseball is a fantastic film that takes home movie of the week honors. Until next week, watch more movies!