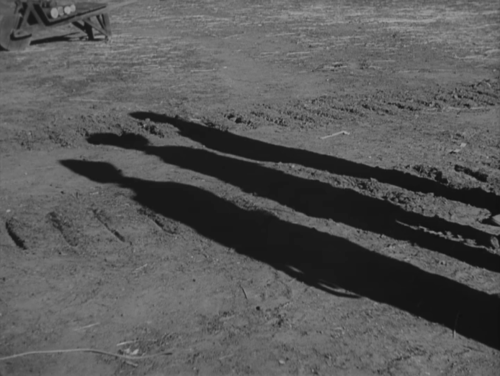 All that dust can’t be helping all those craggy faces!

There’s a popular beginning turn of phrase that goes, “when the dust settles.” The Grapes Of Wrath answers the question of what happens when the dust settles, and where exactly does it settle? What happens when the Great Depression hits and everyone must scramble to try and survive? The Grapes Of Wrath answers that question as well. John Ford’s film answers a lot of questions about the American spirit, American history, and our American present. These answers aren’t always what we’re looking for, and they may not be applicable to everyone. But, they are answers, and those answers provide valuable insight into the biggest question of all; just how much damage can humanity inflict upon itself?

What can I say about Mr. Ford that hasn’t already been said? The answer is that I can’t say much, there’s a reason Mr. Ford receives almost universal praise as a director. Something I paid particular attention to in The Grapes Of Wrath was the way that he used light. More to the point, I was impressed with the way he would bring light into scenes through other objects. It would shoot in through the trees, flicker into view from the underside of a car, and so forth. I took that as a very clear message that there isn’t a heck of a lot of unfiltered light in the world of The Grapes Of Wrath. There are plenty of scenes in broad daylight, but some of the most important scenes feature light being filtered through some measure. Beyond the mark that the usage of light made on me, The Grapes Of Wrath is a wonderfully framed film. There wasn’t a single frame where I felt that a character was out of place or that a single speck of space was being misused. Mr. Ford was always, and proves again in The Grapes Of Wrath, a director who knew how to frame a scene.

I have nothing but positive things to say about The Grapes Of Wrath. I could try all day and I wouldn’t be able to come up with a negative thought about The Grapes Of Wrath. I read the novel years ago, but truth be told I was a shade too young when I read it and thus not much of an impression was left on me. Mr. Ford’s adaptation of the novel has come around at the perfect time in my cinematic life. I can better appreciate what The Grapes Of Wrath is aiming for at this time that I could have a few years back. It’s always a pleasure to watch one of the best thought of films of all time from one of histories greatest directors and have said film pan out. It’s bleak, it’s a harsh take on humanity, but within all the harshness there exists a beautiful snapshot of the perseverance and ugliness of humanity. That is The Grapes Of Wrath, and that’s why it’s such a fantastic motion picture.