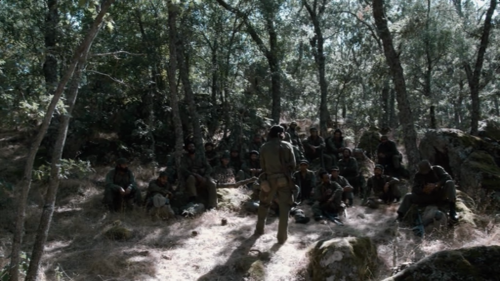 Where Che: Part Two enticed me as a viewer was in the tackling of revolution versus damage caused. Che: Part One took the easy route of showing all the victories and great moments of Che’s participation in the Cuban revolution. The idea of Cuban citizens not cooperating, or believing in, the revolution was never truly broached. Che: Part Two brings a decided opposition viewpoint to Che’s revolution. The film shows us peasants not wanting to take part in the revolution, as well as soldiers and common folk disagreeing completely with the Bolivian revolution. Che: Part Two takes it one step further by giving the viewer moments where the Bolivian revolution, and Che specifically, falter when faced with opposition from the people they think should be on their side. In some cases they resort to extortion and threats of violence to get what they want from the common people. In other cases, Che specifically in this instance, the revolution lashes out at an innocent, a horse, and takes their frustrations out on said horse by taking its life. I give the creative minds behind Che: Part Two all the credit in the world for allowing the Bolivian revolution to be so in the grey and ambiguous in its intentions and results.

For a movie about Che Guevara, there’s a decided lack of Che in Che: Part Two. Yes, he is in the film and he probably still has the most screen time of any character. But, there are long stretches of Che: Part Two where there’s no Che to be found. This wouldn’t be a problem if the film was interested in fleshing out the characters that surround the lead. Che: Part Two isn’t interested in such things, even if it is interested in attaching emotional moments to its undeveloped characters. In one key moment we are allowed to see the dead bodies of two of Che’s top soldiers. The framing of the scene, the dialogue, the direction, the music, etc. wanted me to come away from that moment feeling something for those men. In order for me to feel something for those characters I needed to know who they were or why they mattered, but Che: Part Two couldn’t be bothered with such efforts at character building.

I’m glad that Mr. Soderbergh gets to make the films he wants to make. Most of the time Mr. Soderbergh makes films that I want to see and that I enjoy watching. Che: Part Two is a miss from Mr. Soderbergh. It’s a poorly constructed biopic, with a jumble of themes and narrative choices that never gel into one cohesive picture. There are plenty of better biopics out there for people to see, and that’s why only big fans of Steven Soderbergh should make the time to see Che: Part Two.