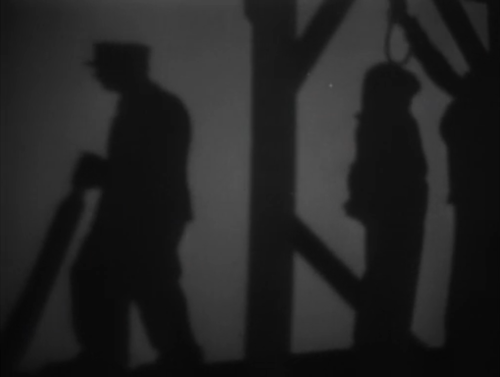 I’m never around for the moon to rise, and I’ve seen far too many sunrises for my liking!

A few years ago I was a frequent contributor to the message board for a popular film related podcast. In my waning days of posting at said message board a few people there started campaigning heavily for a director by the name of Frank Borzage. In a short span of time they watched a number of his films and would shout for all to hear that he made great films and was one of the most underrated directors the film world had ever seen. I had nothing against Mr. Borzage, but to be frank, I had never heard of him. I had so many movies on my plate to devour that I knew I wouldn’t get around to Mr. Borzage anytime in the near future. Fast forward a couple of years and I stumble across one of Mr. Borzage’s films when I’m busy adding new movies to my Netflix Instant Queue (for the first time in about five years mind you). The choice was a simple one, I plugged Moonrise into my queue, saw that it was expiring soon, and made some time to watch it and see what all the Mr. Borzage fuss was about.

I know it’s cliche, but I’m upset that it took me so long to get around to a Frank Borzage film. I loved Moonrise, and I find myself struggling to qualify why I loved it so much. The reason for this is simple, Moonrise is not a film that fits into any sort of box. It has noir tendencies, but it’s also very romantic, and at times comedic in an old timey way. Mr. Borzage’s film is full of tension, deep themes, developed characters, and interesting tricks of the camera. Moonrise has something to offer every lover of cinema, and that’s hard to explain sometimes.

I leave Moonrise convinced that it’s a film about hate. That emotion is hard to showcase on film, and Odin knows plenty of directors have tried. Mr. Borzage isn’t the first to successfully portray the damning power of hate, and he won’t be the last. But, I find that there are a lot more misses when it comes to portraying hate than there are hits. Moonrise is special because it gets right to the heart of hate and how it can control a person. The hatred inside of Danny Hawkins is so powerful that it affects every second of his existence. He hates when he’s awake, he hates when he’s asleep, he hates when he’s happy, and he hates when he’s in love. All Danny does is hate, and the power of hatred damn near ruins his life. Moonrise doesn’t judge Danny’s hate, instead it shows his hate in all its power. The viewer gets to see how his hate can lead to great things and how it can tear him down. We get to see hate right up against love, and the serenity that can come about when a man finally gives up his hate.

Mr. Borzage utilizes various tricks in his filmmaking bag, and they all work for the most part. The opening sequence using shadows to portray a hanging is gorgeous and an excellent way of showing an important moment without truly showing the moment. Later an image of Danny’s great shame is superimposed over a car window while he’s driving, to great effect. Even the simple moments, such as Danny appearing from the brush of a swamp are handled in deft fashion. We see Danny leaving the light, signifying that his flee into the swamp will only take him into more darkness. It’s only one film, but Mr. Borzage impressed me mightily as a director in Moonrise.

I’m late to the Frank Borzage train, but luckily there’s still plenty of room for others to hop on board with me. Mr. Borzage is a great director, a director whose films deserve to be seen by more people. Maybe it’s a noir, maybe it’s a romance, or maybe it’s a dark comedy. Whatever label one wants to stick on Moonrise, the most fitting label is that of a terrifically made film. I’m looking forward to checking out more from Frank Borzage when I get the chance. Moonrise proves that Mr. Borzage is a director whose body of work is worth seeking out.