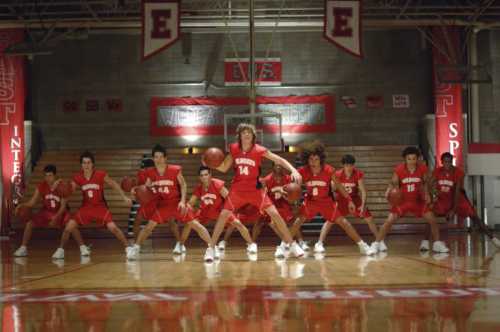 Back when I was in high school I don’t think there was any singing or dancing, of any sort!

It’s a musical sort of week,

Not my style, not my style at all. I’ve never been a big fan of William Shakespeare’s dialogue to begin with but transported ahead in time and placed in this setting I like it even less. Baz Luhrmann was just too busy, this is a film that never knows when to leave well enough alone and it consistently bugged me. I get that others love this to death, but it did nothing for me.

That Zac Efron, he sure does have loads of charisma. And, you know what, this was a good movie. It’s certainly not a top tier musical or anything like that, and it is corny as all get out, but it’s a lot of fun. The songs work, it is funny, and it actually has a good message about not constricting yourself to whatever label society has given you. I get that a lot of adult film goers hate this, but it’s good stuff so get over whatever misconceptions you may have about this film and give it a try.

This is my girlfriends all time favorite love story, and surprisingly she’s happy with me only saying it was good, but not great. As far as the songs go this is a damn fine musical, there’s something to be said for getting a cast full of people that can really belt out a tune. It’s also an interesting piece about many things, but for me I found its main thrust to be in the idea of emerging from the darkness of the 80s into the light of the 90s. Sure, history tells us this isn’t a solid way of thinking, but the movie handles this idea very well. The opening fire scene is outstanding, I actually turned to my girlfriend and said, “there’s no way Chris Columbus directed this.” Then the rest of the movie happened and I knew that Mr. Columbus directed it, all the pizzazz he had he used in that opening sequence because the rest of the film is very plain and visually boring. There’s also some minor issues with some of the characters, like Taye Diggs’ Bennie who exists only to jump in and move the plot along from time to time, and the age of the actors compared to the age of the characters they were playing was off putting. All in all, it’s a good musical with some great songs, it’s worth checking out.

Right off the bat, the added number that made this extended isn’t really necessary, or that good of a number. Otherwise, much the same as the first, except a bit more polished. The songs were especially catchy, or maybe inventive is the word I’m looking for, this time around. The story was not as compelling however, interlude typed by my girlfriend=i love sarah, and I didn’t care for the regression in Ashley Tisdale’s character or the two Bollywood numbers back to back to end the film. Still, it was once again a lot of fun, although this time out Lucas Grabeel totally outshines Zac Efron, Mr. Efron’s whiny number with the frolicking through the grounds was just bad. But, you know, fun like I said, and like I said with the first one movie goers who easily dismiss this series are missing out on some quality musical films.

Wildly imaginative, but ultimately lacking. This had all the makings of a fantasy wonder, but it threw too much at the viewer. On the one hand it spells out the entire universe right away, but then it never explains or allows the visuals or dialogue to explain the universe as it goes along. That was very frustrating, and that’s how I felt through most of the movie. I knew how good it could be, it certainly looked good, but it never quite came together.